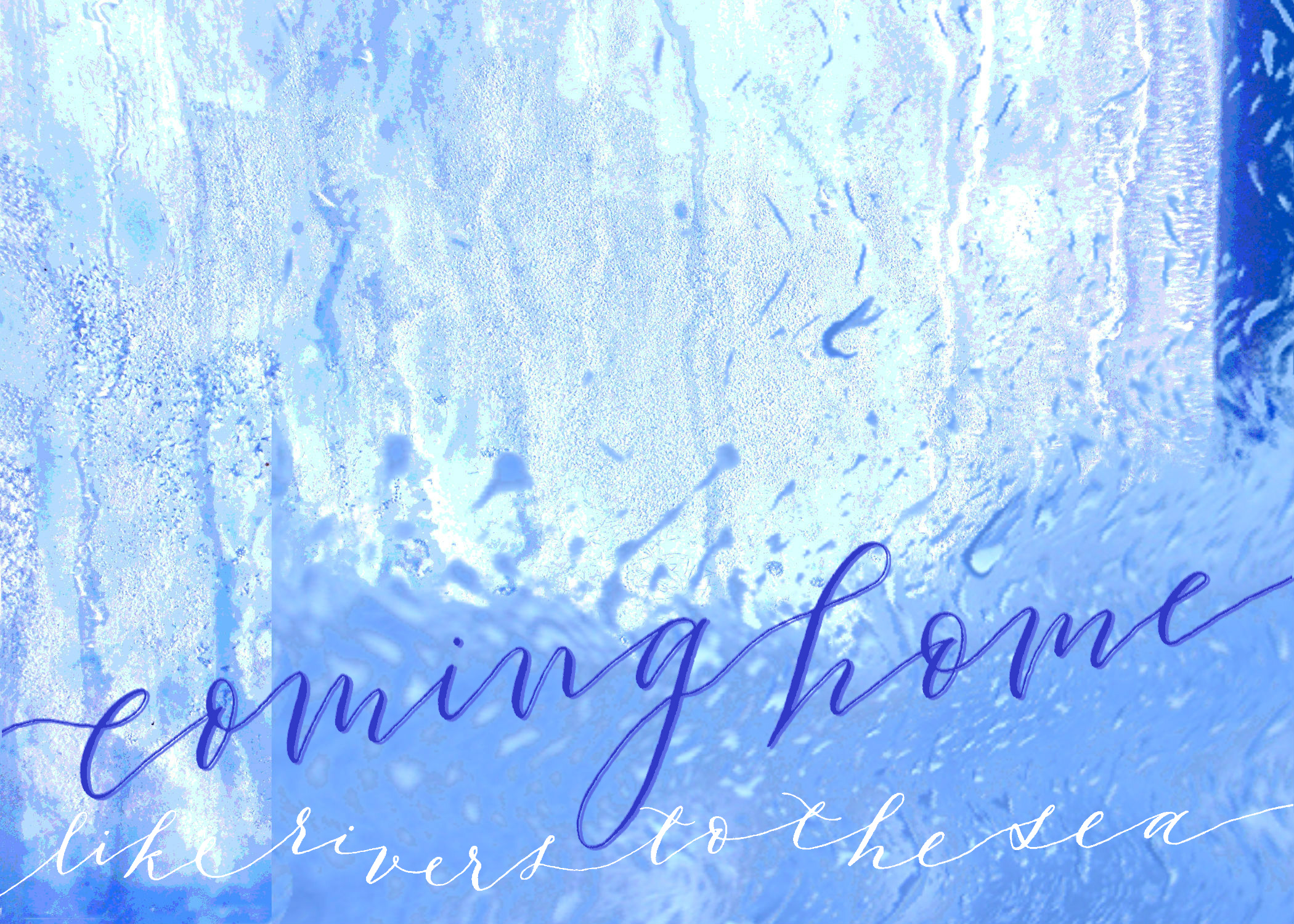 On the cusp of fall, many Unitarian Universalist congregations plan Water Celebrations and/or Ingathering Services as a way of reconstituting community life after the more relaxed pace of summer.  But while these services are common, they are not always deep.  Many have indicated dissatisfaction with these services:  water rituals reduced to monologues about expensive travels; ingatherings that vaguely celebrate the restarting of a church season that possibly felt like it never ended.   Let Harvard Square Library help you amplify the meaning of these traditions by connecting you with their deepest wellsprings.

To commemorate the original water ceremony, the Harvard Square Library has commissioned an original graphic from artist Cathleen Young.   A high resolution file suitable for download is available here (you may want to use it to announce your ritual, or as an order of service graphic).   If you use the graphic, please consider making a donation to HSL (left column). 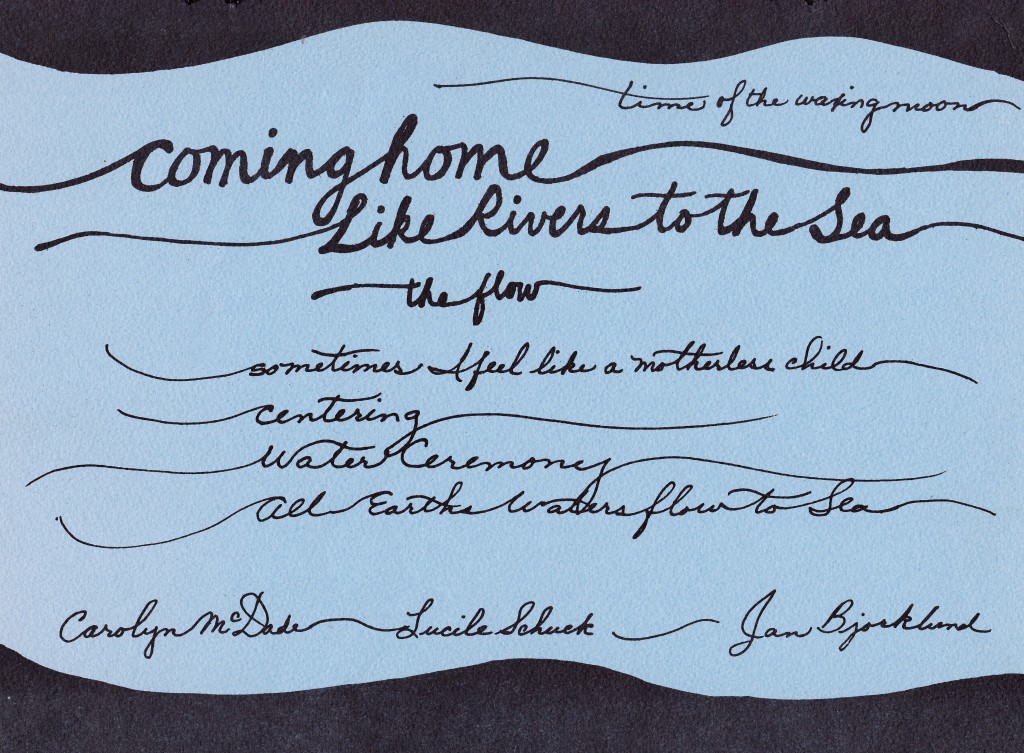 The cover to the original ritual’s order of service. Click here for the complete typescript of the original.

In 1975, Lucile Shuck Longview, a devoted member of the UU Parish in Lexington, served as the UU delegate to the United Nations “Women’s Year” assembly in Mexico City.  She returned from that assembly convinced that religion, even her beloved Unitarian Universalism, was a chief culprit in the perpetuation of oppressive sexism.  Back in Lexington she gathered support and authored what became the “Women and Religion” Resolution passed by the 1977 General Assembly.  That resolution called for an intensive examination of the “sexism inherent in religious literature and institutions” –beginning with the UUA itself.

UUA President Paul Carnes put together a committee to work on the resolutions, and districts were encouraged to support related Women and Religion groups.  These groups quickly noted the necessity of rewriting the original 1961 UUA’s Purposes and Principles, which used male gendered language to express the concerns and dignity of “mankind,” and which failed to address the care of Mother Earth as a religious priority.  In 1985 the Principles and Purposes as we know them today were passed by General Assembly, complete with the inclusion of respect for the “interdependent web of existence” as a new principle.

The Harvard Square Library is proud to have recently added the minutes from UUA General Assemblies 1961-1993 to our collection.  Check out the original 1961 Purposes and Principles, or the Original 1977 Women and Religion Resolution.

The path from Longview’s 1975 experience with the United Nations to the General Assembly in 1985 was long and difficult.  In between those two benchmark dates there were countless meetings, conversations, and worship services that served as profound spiritual explorations of the sought after transformations.  The first “water ritual” was part of one such worship service, “Coming Home, Like Rivers to the Sea,”  which was designed for the UU Women and Religion Continental Convocation held in East Lansing, Michigan, in 1980.   The worship was constructed by Lucile Shuck Longview and Carolyn MacDade.  This is what they later said about the significance of the service:

The water ceremony became the central part of a religious service that broke with tradition in significant ways. It was created by lay women, women who had long been silent in the pews. The ritual space was also made sacred by the women themselves. We gathered to worship in a way authentic and liberating to us, not as in a church but in a semicircle around a large common earthen bowl. It was a ritual of women’s being connected by a universal symbol, water, a ritual of women being connected to the totality of life.

Here is the exposition of the theme from inside of the worship itself:

Making our way like rivers from places distant and near, we come together to give shape to a new spirituality. For there is no theology that calls women to strength rather than to support the strength of others; that calls women to action rather than to passivity; that calls women to full expression rather than to meek acceptance.  Recognizing that, we see we must question every box, every definition, every assignment from an authority outside our own beings so that we can create and re-create for ourselves the rituals and symbols that give meaning to us. So we come together to question. To hear. To share. To speak. To inspire. And to celebrate through new rituals, knowing that our energy and our love are transforming.  Celebrating now our connectedness, we choose water as our symbol of our empowerment. As rivers in cycle release their waters and regain new beginnings, so do we cycle. For us as women these beginnings are powerful, but not easy. But still we come to create and to celebrate and to live by the only spirituality worthy of our devotion—a spirituality that uplifts, empowers and connects.

Just like in contemporary water celebrations, different participants had been asked to bring to the service water that held special meaning for them.  Those waters were then co-mingled as the women shared.  Unlike many contemporary celebrations, however, the original ritual noted that it was important for those participating to have the opportunity to take some of the co-mingled waters home.  Indeed, they invited the women present to empty out any bottle of cosmetics or perfume that they might have brought with them and to use it to convey some of the water home–thus abandoning a product that exploited perceived feminine inadequacies to make room for that which might remind them of their shared power.  But most of all, persons accustomed to the current practice of water celebrations might be surprised by the depth of sharing that took place as the waters were mingled.

Here is an example of what one participant shared as she poured her water into the common bowl.  This is from the typescript of the original service:

Ingatherings, or Those Unitarian Summers Off 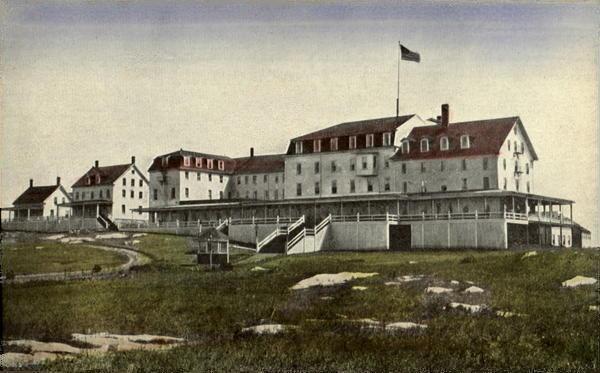 The Oceanic Hotel on Star Island in 1910. To read the complete story about Unitarian Summers away from church, and why that tradition began to change, click here!

As “Ingathering” services seem to mark the recommencement of a church calendar suspended for the summer, many people assume that their origin must be fairly old, consistent with the 19th century tradition of recessing church for the summer (at least in the city;  in the vacation areas and coastal towns, worships were both consistently offered and well attended in the summer months).  Yet, in most Unitarian churches in the 19th century, the start of the church year was not celebrated with any special worship.   Many church bulletins noted the minister’s return from his vacation by the sea, his “health much improved.” And sometimes that newly revived minister would start up a special sermon series on his return to the pulpit, but those services bore no relation to the “Ingathering” services that Unitarian Universalists know today.    Unitarian Universalist historian Susan Ritchie is convinced that Ingathering services evolved as fairly modern hybrids of New England autumn harvest festivals (the harvest itself often called a “gathering in”) and collegiate homecoming traditions.