The earliest Anglo-American burials in Puritan North America took place in graveyards, where grave markers often included the motif of a skull, or death head, sometimes with or without wings.  These markers, as well as the burial grounds themselves, were intended to make people fearful.  They were reminders that not only is death always rushing towards us, but that it is likely accompanied by damnation.   But over the course of the next hundred years, the images on grave markers change (play the embedded video below to watch how this happens). The skull begins to morph into more of a face, the teeth lose their points, and flowers spring up where before there were crossed bones.  Liberal religion both caused and was caused by the transformations that made that such a progression from fear to hope possible.

The Harvard Square Library invites you to learn more about the history of Unitarian Universalist attitudes towards death. 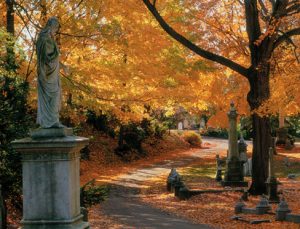 You might begin by exploring  the history of Mount Auburn Cemetery, established by prominent Unitarians in Cambridge, Machachussets in 1831.  the origin of the rural cemetery movement in the United States.  In these new “places of repose,” in complete contrast to the only Puritan burial grounds,  grave markers were artistic, classical monuments presented in the context of a beautiful, cultivated landscape.  Encouraged to enjoy beauty of the landscaping,, the public learned to contemplate death in the peaceful context of nature and beauty.  The HSL Mount Auburn collection includes the account of Mount Auburn’s origins by the chair of its board, Dr. John Bigelow.  You can also read the moving address given at the consecration of the cemetery by Judge Joseph Story, who was speaking just a short time after the death of his own daughter.  You can also take a virtual tour of the cemetery, in the form of mid 19th century engravings.

If you are inspired to learn more, the Harvard Square Library recommends Rev. Edward Searl’s “Teaching the World to Die: Unitarian Universalist Attitudes Towards Death,” available through amazon.