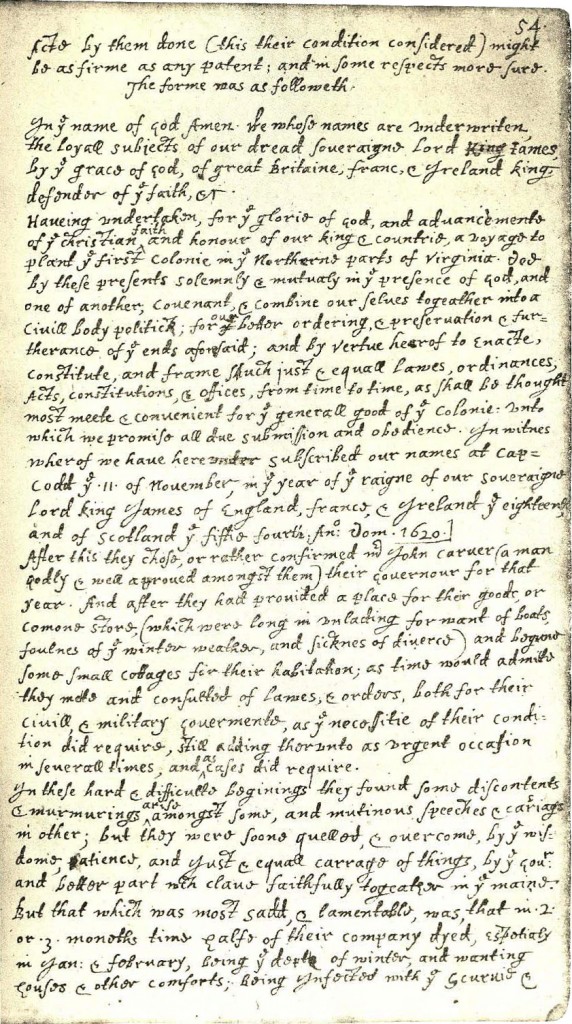 William Bradford’s transcription of the Mayflower Compact made circa 1630

The Compact is not a creed or even what today would be termed a religious document. Since the Mayflower landed beyond the boundaries of Virginia, all on, board, once off the boat, would be free (“none had the power to command them,” wrote Governor Bradford). The solution was a covenant to which each subscribed freely.

The form of civil covenant, however, grew out of the Pilgrim concept of how to form a church, and thus had an important influence on shaping the mutual development of churches of the congregational way and state in the Commonwealth of Massachusetts.

It is important to note that freedom to covenant did not grant freedom of religious belief to individuals. The immediate question for the churches became how they related to one another (see Cambridge Platform – 1648).

What provides the central concept of the Mayflower Compact?

How did the Compact influence the development of the church?

Although the text of the Mayflower Compact is widely reproduced online, we recommend the following source for the full text: www.pilgrimhallmuseum.org/mayflower_compact_text.htm

IN THE NAME OF GOD, AMEN. We, whose names are underwritten, the Loyal Subjects of our dread Sovereign Lord King James, by the Grace of God, of Great Britain, France, and Ireland, King, Defender of the Faith, &c. Having undertaken for the Glory of God, and Advancement of the Christian Faith, and the Honour of our King and Country, a Voyage to plant the first Colony in the northern Parts of Virginia; Do by these Presents, solemnly and mutually, in the Presence of God and one another, covenant and combine ourselves together into a civil Body Politick, for our better Ordering and Preservation, and Furtherance of the Ends aforesaid: And by Virtue hereof do enact, constitute, and frame, such just and equal Laws, Ordinances, Acts, Constitutions, and Officers, from time to time, as shall be thought most meet and convenient for the general Good of the Colony; unto which we promise all due Submission and Obedience. IN WITNESS whereof we have hereunto subscribed our names at Cape-Cod the eleventh of November, in the Reign of our Sovereign Lord King James, of England, France, and Ireland, the eighteenth, and of Scotland the fifty-fourth, Anno Domini; 1620.