The Church in Harvard Square: The Eighteenth Century 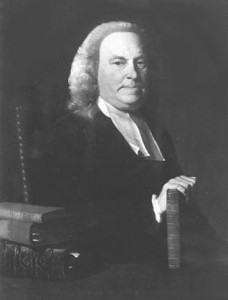 Portrait of Nathaniel Appleton from the Fogg Art Museum.

Nathaniel Appleton (1693-1784) was minister of the Cambridge church for 67 years, from 1717… until his death. Because of the increase of population, the section of Cambridge known as Menotomy (now Arlington) was given the status of a religious precinct in 1732; the remaining part then became the First Parish. Similarly, Brighton became a separate precinct of the town in 1779. In 1740-43, New England was convulsed by an upsurge of religious revivalism known as the Great Awakening. It was strongly encouraged by some ministers, but criticized by others for its emotionalism. Appleton, at first, welcomed a heightened interest in religion, but in his Convention Sermon of 1743, he warned against the “peculiar Zeal” of the revitalists which, he feared “is not according to Knowledge”.

Appleton’s Faithful Ministers of Christ, the Salt of the Earth, and the Light of the World from the First Church in Cambridge Archives. (Title page transcription) 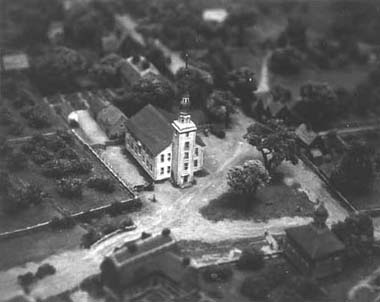 The Third Meeting House and the Court House (right) are shown in the Old Cambridge diorama at the Widener Library.

Back ^ Title page of Appleton’s Faithful Ministers of Christ, the Salt of the Earth, and the Light of the World from the First Church archives

Faithful Ministers of Christ, the Salt of the Earth, and the Light of the World

Illustrated in a Sermon
Preach’d before the Ministers of the Province of the Massachusetts Bay, in New-England, at their Annual Convention in Boston. May 26, 1743.

By Nathanael Appleton, A.M
Pastor of the first Church in Cambridge.

Deut. xxxiii. 8. And of Levi he said, let thy Thummim, and thy Urim, be with the holy One,
Matth. x. 16. – Be ye therefore wise as Serpents, and harmless as Doves.

N.B. Several Passages and Paragraphs which for want of Time, were omitted in the preaching, appear in the Print, and for Distinction are taken into such Crotchets as these [ ]

Boston, Printed by Rogers and Fowle, for Samuel Eliot in Cornhill. 1743.