The Diet of Torda 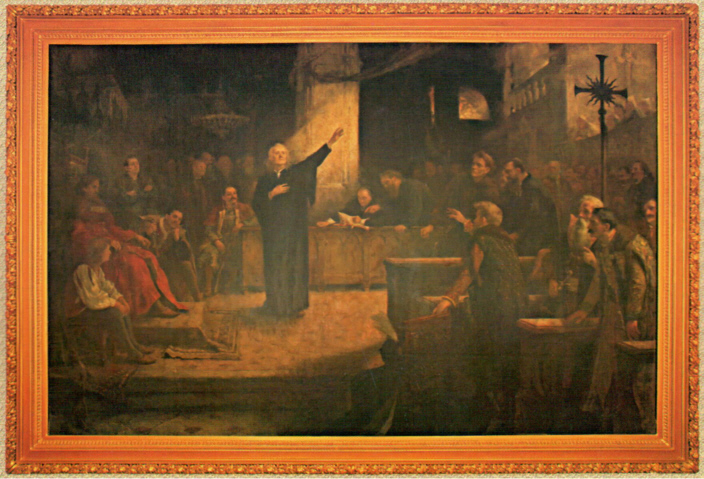 “The Proclamation of the Act on Religious Freedom at the 1568 Session of the Transylvanian Diet” by Aladár Körösfői Kriesch, 1896.

“Act of Religious Tolerance and Freedom of Conscience”

Three translations of this short act are given. The first which appears in David B. Parke’s The Epic of Unitarianism (Starr King, 1957) is by the Sate Alexander St. Ivanyi, a onetime Unitarian bishop in Hungary, who went into exile after World war II and served as a Unitarian Minister in the United States for many years.

The third translation by Dr. Judit Gellérd is from the Erdö book. Dr. Gellérd lives in California but grew up in Transylvania.

The tremendous import of the Torda Act is not only historical (a unique breakthrough for religious toleration) but also remarkable for its first enunciation of the contemporary Unitarian concept of “freedom of the pulpit and freedom of the pew.” The Act also cuts the church loose from state control and takes away any mediator between the individual believer and the divine (“since faith is the gift of God”).

1)    Why was such an important Act so largely ignored, quickly forgotten, and little remembered outside remote tomes on Unitarian history?

2)    Did the very freedom of the Act lead to a radicalism that killed the Unitarian promise? See Earl Morse Wilbur, A History of Unitarianism, vol. 2 (Harvard, 1952), chapter V.

Translation I, from Epic of Unitarianism, pp. 19-20

“His Majesty, our Lord, in whatever manner he—together with his realm [i.e. the Diet]—legislated in the matter of religion at the previous Diets, in the same manner now, in this Diet, he reaffirms that in every place the preachers shall preach and explain the Gospel each according to his understanding of it, and if the congregation like it, well, if not, no one shall compel them for their souls would not be satisfied, but they shall be permitted to keep a preacher whose teaching they approve. Therefore none of the superintendents or others shall abuse the preachers, no one shall be reviled for his religion by anyone, according to the previous statutes, and it is not permitted that anyone should threaten anyone else by imprisonment or by removal from his post for his teaching, for faith is the gift of God, this comes from hearing, which hearing is by the word of God.”

“Preachers everywhere are to preach the gospel according to their understanding of it; if the parish willingly receives it good: but if not, let there be no compulsion on it to do so, since that would not ease any man’s soul; but let each parish keep a minister whose teaching is acceptable to it. Let no superintendent or anyone else act violently or abusively to a preacher. No one may threaten another, on account of his teaching, with imprisonment or deprivation of office: for faith is a gift of God; it comes from listening, and listening is through God’s word.”

“‘Our Royal Majesty, as he had decided at the previous debates within his country about matters of religion, confirms as well at the present Diet that every orator shall preach the gospel by his own [personal] conception, at any place if that community is willing to accept him, or if it isn’t, no one should force him just because their soul is not satisfied with him; but a community can keep such a preacher whose teachings are delightful. And no one, neither superintendents nor others, may hurt a preacher by this or by the previous constitutions; no on may be blamed because of their religion. No one is allowed to threaten others with prison or divest anyone of their office because of their profession: because faith is God’s gift born from hearing and this hearing is conceived by the word of God.’”