The Church in Harvard Square: The Church Gathering

Shepard’s The Parable of the Ten Virgins from the First Parish in Cambridge Archives. (Title page transcription)

In the fall of 1635, there came to Newtowne a new company of settlers under the guidance of Thomas Shepard. They purchased the properties of the Hooker company, who were then preparing to leave for Connecticut. On February 1, 1636, they gathered a new church, as described in detail in the journal of Governor John Winthrop.

The ordination of Shepard as minister of the newly-gathered church soon followed. In 1637, the college established at Newtowne, where Shepard and his church were known to be free of the errors ascribed to Anne Hutchinson, then agitating the little colony. Shepard, indeed, had presided of the synod at which those errors were condemned.

Thomas Shepard was remembered for his winning personality as well as for his evangelical preaching. His contemporary Edward Johnson described him thus:

that gratious sweete Heavenly minded, and soule-ravishing Minister, Mr. Thomas Shepheard, in whose soule the Lord shed abroad his love so abundantly, that thousands of souls have cause to blesse God for him, even at this very day, who are the Seale of his Ministry, and hee a man of a thousand, indeed with abundance of true saving knowledge for himselfe and others, yet his naturall Parts were weake, but spent to the full. 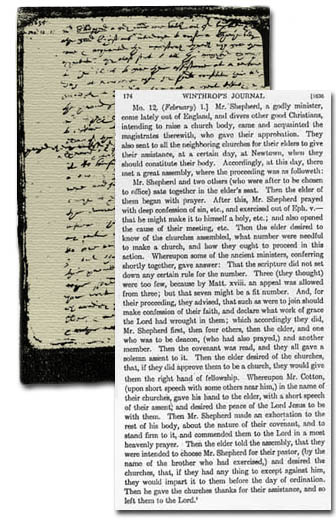 The above handwritten manuscript is from the journal of John Winthrop, courtesy of the Massachusetts Historical Society. (Transcription) 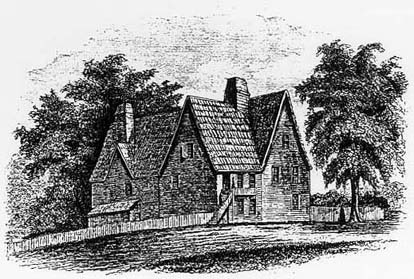 The Parable of the Ten Virgins Opened & Applied

Being the substance of divers sermons on Matth. 25. I, – 13.
Wherein, the Difference between the Sincere Christian and the most Refined Hypocrite, the Nature & Characters of Saving and of Common Grace, the Dangers and Diseases incident to most flourishing Churches or Christians, and other Spiritual Truths of greatest importance, are clearly discovered, and practically improved,

By Thomas Shepard
Late Worthy and Faithful Pastor of the Church of Christ at Cambridge in New-England.

Now published from the Authors own notes, at the desires of many, for the common Benefit of the Lords people,
By {Jonathan Mitchell Minister at Cambridge, Tho. Shepard, Son to the Reverend Author, now Minister at Charles-Town}in New-England.

Luke 21. 36.
Watch ye therfore and pray always, that ye may be accounted worthy to escape all these things that shall come to pass, and to stand before the Son of man.

Re-printed, and carefully Corrected in the Year, 1695

No. 12. (February) 1.] Mr. Shepherd, a godly minister, come lately out of England, and divers other good Christians, intending to raise a church body, came and acquainted the magistrates therewith, who gave their approbation. They also sent to all the neighboring churches for their elders to give their assistance, at a certain day, at Newtown, when they should constitute their body. Accordingly, at this day, there met a great assembly, where the proceeding was as followeth:

Mr. Shepherd and two others (who were after to be chosen to office) sate together in the elder’s seate. Then the elder of them began with prayer. After this, Mr. Shepherd prayed with deep confession of sin, etc., and exercised out of Eph. v.— that he might make it to himself a holy, etc.; and also opened the cause of their meeting, etc. Then the elder desired to know of the churches assembled, what number were needful to make a church, and how they ought to proceed in this action. Whereupon some of the ancient ministers, conferring shourtly together, gave answer: That the scripture did not set down any certain rule for the number. Three (they thought) were too few, because by Matt. xvii. an appeal was allowed from three; but that seven bight be a fit number. And, for their proceeding, they advised, that such as were to join should make confession of their faith, and declare what work of grace the Lord had wrought in them; which accordingly they did, Mr. Shepherd first, then four others, then the elder and one who was to be deacon, ( who had also prayed, ) Then the covenant was read, and they all gave a solemn assent to it. Then the elder desired of the churches, that if they did approve them to be a church, they would give them the right hand of fellowship. Whereupon Mr. Cotton, (upon short speech with some others near him,) in the name of their churches, gave his hand to the elder, with a short speech of their assent, and desired the peace of the Lord Jesus to be with them. Then Mr. Shepherd made an exhortation to the rest of his body, about the nature of their covenant, and to stand firm to it, and commended them to the Lord in a most heavenly prayer. Then the elder told the assembly, that they were needed to choose Mr. Shepherd for their pastor, (by the name of the brother who had exercised, ) and desired the churches, that if they had any thing to except against him, they would impart it to them before the day of ordination. Then he gave the churches thanks for their assistance, and so left them to the Lord.