The Church in Harvard Square: Outreach To The World Community

Outreach To The World Community 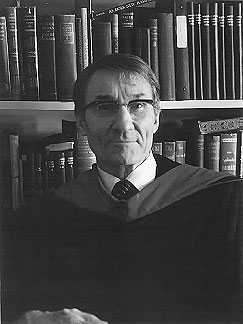 From being a quiet commercial center serving the college community and the residents of Old Cambridge, Harvard Square after World War II became an international crossroads of intellectual and political activity.

The ministry of Ralph Norman Helverson (1959 to 1977) responded with vigor to the dramatically changed social environment. He led First Parish in the development of several new initiatives: the Cambridge Forum; the Nameless Coffeehouse; participation in Planning for People, concerned with the re-design of Harvard Square; and the expansion of both the Paine Social Services and the Parish Endowment Fund.

For many years, Ralph Helverson was the voice of Unitarian Universalism on Boston radio, where his distinctive Sunday morning broadcasts, Window on Harvard Square, brought the message of the liberal church to many people for the first time. His engaging preaching style and insightful content attracted a wide following both at First Parish in Cambridge and in his radio audience.

In recognition of their many contributions, the congregation dedicated the Parish House meeting room The Ralph N. and Wynanda Helverson Parlor and a plaque was installed to commemorate the event on April 25, 1999.

Ralph Helverson and Dan Huntington Fenn in the pulpit

History in the Making 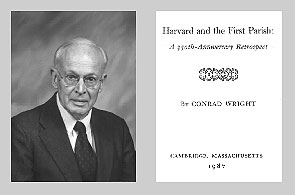 Recent decades have seen an increased historical awareness among Unitarian Universalists and the publication of important works of historical scholarship in the field of religious studies.

These new developments are exemplified in the work of Conrad Wright, a lifelong member of First Parish. As Professor of American Church History at the Harvard Divinity School, he has introduced the history of the denomination to many of those active in the Unitarian Universalist ministry and to scholars of the evolution of the Puritan church in America.

His many books and articles have significantly advanced the understanding of Unitarian history and congregational polity among both scholars and the general public. Among his publications are: The Beginnings of Unitarianism in America (1954), The Liberal Christians (1970), The Unitarian Controversy (1994), and Congregational Polity (1997).

Dr. Wright was also, for many years, the President of the Unitarian Historical Society. For his contributions to scholarship and education, his colleagues and friends dedicated, in 2002, the C. Conrad Wright Room in Andover-Harvard Theological Library at the Harvard Divinity School. 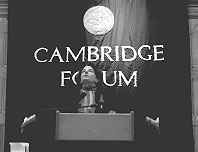 The First Parish in Cambridge is widely known through its creation and sponsorship of The Cambridge Forum, a weekly program begun in the late 1960’s, in which leaders in academia, politics, and the professions speak out on critical issues and respond to audience questions.

Herbert F. Vetter, Minister at Large at First Parish, was the founder of the Forum and, for many years, acted as moderator of the popular series. The programs were first broadcast in the Boston area by the WGBH Educational Foundation via WGBH-FM and then by public radio stations across the country. Cambridge Forum also broadcast many special national television programs, notably the 1980 Channing Bicentennial series, I Call That Mind Free, co-sponsored by the Unitarian Universalist Association. 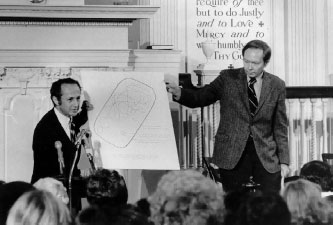 Prof. Matthew Meselson and Moderator Herbert Vetter at the Cambridge Forum session on the controversial topic “Should we halt recombinant DNA research?”

Cambridge Forum has continued to expand its outreach and is being webcast worldwide through the WGBH Community Forum. A promising new website at www.harvardsquarelibrary.org, created by Herbert Vetter, presents issues which religious liberals stand for – and against – to audiences around the globe. For his pioneering work in the communications field, he was honored in 1983, by the award of the Doctor of Divinity degree by the Meadville/Lombard Theological School in Chicago.