The Church in Harvard Square: Move Toward Independence 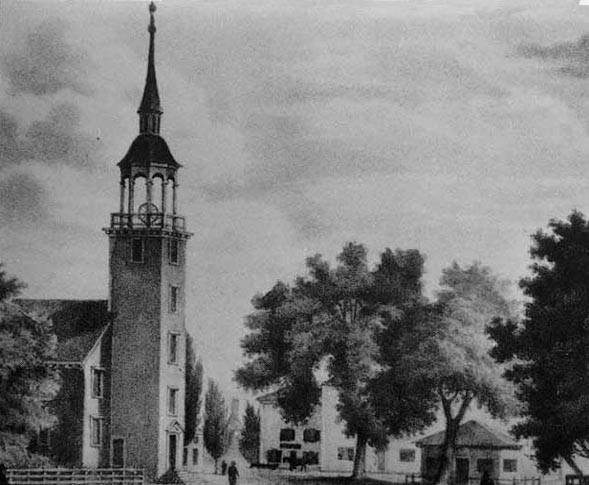 The Fourth Meeting House (1756-1833), viewed from the Common. It was used for worship, town meetings and college ceremonies.

The Fourth Meeting House was erected in 1756 on land now part of the College Yard, where Lehman Hall stands. The pulpit was in the middle of the long north wall, and most of the floor was divided into box pews. The main entrance was opposite the pulpit, not under the tower at the west end. Seats in the front gallery were set aside for students in the college. The building was used on many public occasions, including college commencements and the inauguration of college presidents. 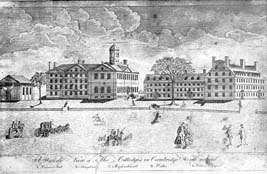 Harvard College in 1767
from Views of Harvard, Harvard University Press.

The first sessions of the convention that framed the present Constitution of the Commonwealth met here in 1779. In 1833, the property was transferred to Harvard College and the building torn down; the Parish receive, in exchange, the land on which it constructed the Fifth Meeting House, the college contributing to the cost.

As shown in the original documents below, the American Revolution is reflected in successive warrants for meetings of the First Parish. In 1775, the inhabitants are greeted “in his majesties Name”. The following year, the title “his majesty” disappears and the warrant is issued “in the Name of the Government of this Colony and of the People” (below left). In 1781, after the adoption of the Massachusetts Constitution, the wording is: “In the Name of the Government and People of the Common Wealth of Massachusetts” (below right). The warrants are a reminder that while the church was a select covenanted body of communicants, public worship was the common concern of all the inhabitants of the territorial parish. 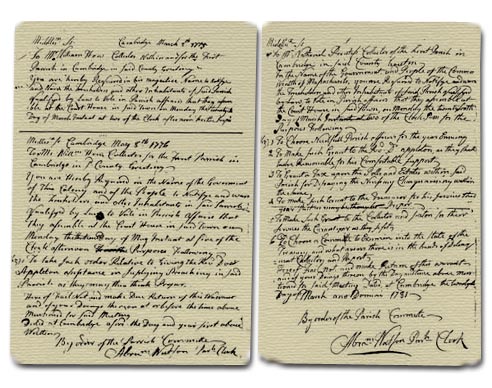 The coming of the Revolution is signalized in two warrants for parish meetings (above left). In the first, shortly before the battles of Lexington and Concord, the warrant is issued “in his Majesties Name.” In the second, a year later but before July 4, 1776, the warrant is issued “in the Name of the Government of this Colony and of the People.” From the First Parish in Cambridge Archives. (Transcription)

Back ^ Two warrants for parish meetings

To Mr. William How Collector Within and for the First Parish in Cambridge in said County Greeting —

Viz 1 To take such order Relative to Giving the Revd Doct Appleton assistance in supplying Preaching in said Parish as they may then think Proper.

Dated at Cambridge aforsd the Day and year first above.

Written, By order of the Parish Committee—