The Church in Harvard Square: For an Industrial Society

For an Industrial Society 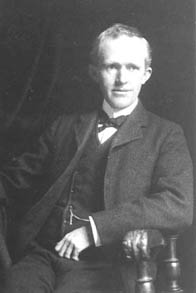 Portrait of Samuel McChord Crothers. From the First Parish in Cambridge Archives.

Samuel McChord Crothers (1857-1927) was well known in his own days as the author of familiar essays, often appearing in the Atlantic Monthly, in which he treated human foibles with a gentle, humorous touch. His parishioners saw another side of him — the religious thinker who knew how to take old dogmas and discover what of value still remained in them; a preacher of singular elevation of thought; the leader of a congregation who encouraged his people in social welfare projects so subtly, that they hardly knew what had moved them; the pastor “who, when a mother was dead, said oh, so very little, but just the right thing”.

Of him, Francis Greenwood Peabody wrote: “When we try to sum up the character that lay behind this lofty teaching, is not the world which comes most easily to our lips the word serenity? This habitual serenity gave him a singular degree of moral courage in decisions of causes and minorities, especially when they were unpopular or undefended; and he brought to their defense, not the fearlessness of a fighter, but the higher courage of a completely tranquil and confident friend.” No minister in the history of the church more completely won the trust and affection of his congregation. 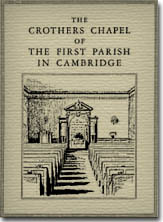 The Crothers chapel is and enduring embodiment of the earnest desire of the living to perpetuate the memory of those whom they have loved, and of those who in the past have shed the light of beauty and truth upon their path. It is a shrine dedicated to a revered minister and to beloved kindred and friends. It is also a gift inspired by love for the children of the parish. It will be the church of the children, a living bond that shall unite into one communion the generations as they come and go, a communion grateful to the past, rejoicing in the present, and filled with faith for the future. It will be open each day for mediation and prayer.

The Chapel follows the colonial tradition. It was designed by Mr. Allen W. Jackson in harmony with the interior of the meeting house which was reconstructed under his direction in 1914. With the Edward Hall Library it forms a colonial wing overlooking the Old Burying Ground. It may be approached from the church through the door on the right of the pulpit, form the Church Street entrance of the Parish House, or through the Old Burying Ground by a path which passes the grave of Dr. and Mrs. Crothers, just under the window of the Minister’s Room. The lights in the Chapel are in memory of Mrs. Crothers. The Oxford Bible on the lectern is given in memory of both Dr. And Mrs. Crothers, and the Chapel has its own organ, made possible by a special gift for that purpose. The rug on the floor of the Edward Hall Library is given in memory of Miss Mary Lee Ware, a first cousin of Rev. Edward Hall. The gratitude of the Parish goes to Mr. Stanley S. Ganz as Chairman of the Chapel Building Committee, to those who served with him, and to all others who in so many and varied ways have contributed to make this chapel possible. 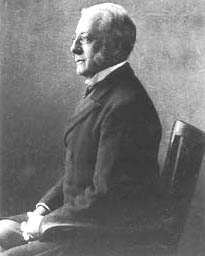 During Eliot’s tenure as president, from 1869 to 1909, Harvard grew from a small provincial college into a renowned university. He was a devoted member of First Parish, attending Sunday services with characteristic regularity.