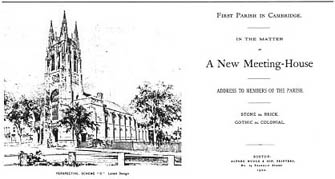 In the 1890s, the Parish seriously considered replacing the fifth meeting house with a new building. Authorization was given for the solicitation of funds for the purpose. But soon disagreements surfaced as to the architectural style to be adopted, and the Parish divided into a stone Gothic faction and a brick Colonial faction. Each faction employed architects to draw up plans supporting its position’ and one of the Gothic proposals is here reproduced. Since opinion was sharply divided, no choice was possible. The old vestry was torn down, however, and replaced by the present parish house, apparently on the assumption that the meeting house would eventually be redone in stone Gothic. In 1914, a decision was made to renovate the interior, but by this time, Gothic was out. The “Gothic” exterior remained until most of the ornamentation was a casualty of the hurricane of 1954. The present building, with its anomalous combination of styles, is a fascinating record of changing architectural taste.

Seating plan of The Meeting House in 1914.

In the matter of a New Meeting-House, Address to Members of the Parish, Stone or Brick, Colonial or Gothic