The Church in Harvard Square: A New Meeting House

The procession of the Alumni from the Church to the Pavillion, September 8, 1836.
From The History of Harvard University by Josiah Quincy, L.L.D.

When the fifth meeting house was built in 1833, the expense was met by the sale of pews. Since Harvard College had contributed to the cost of the fourth meeting house in exchange for pews in the gallery and the use of the building for Commencement and similar occasions, an equivalent arrangement was worked out for the new building.

Many important Harvard events were held here, until the completion of Memorial Hall in 1876 made other space available to the college. In 1836, the bicentennial of the college was celebrated, and the following year, Emerson delivered his oration entitled The American Scholar to the Harvard chapter of Phi Beta Kappa. The meeting house also saw the inauguration of Harvard presidents Edward Everett (1846), Jared Sparks (1849), James Walker (1853), Cornelius C. Felton (1860), Thomas Hill (1862), and Charles W. Elliot (1869).

Portrait of Ralph Waldo Emerson in 1857 By Henry Rowe. 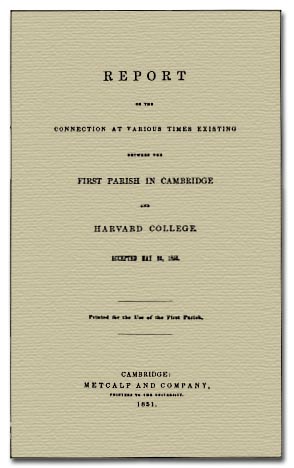 Report of the Connection at Various Times Existing between the First Parish in Cambridge and Harvard College (1851). (Title page transcription)

Printed for the Use of the First Parish. Cambridge: Metcalf and Company, Printers to the University, 1851.