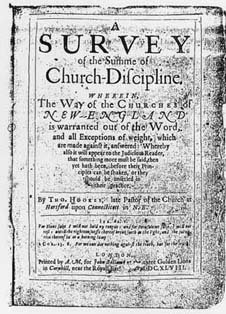 A church was gathered in 1633 of which Thomas Hooker was minister, but he and the church moved to Connecticut in 1636… in part, at least, to secure additional land for cattle and crops. The meeting house was the location in 1637 of the trial of Anne Hutchinson who had claimed that most of the ministers of the colony were guilty of unsound teaching and that God spoke to her “by an immediate revelation”. Her assertions were regarded as highly dangerous and a threat to social order.

From 1646 to 1648, here met the sessions of the synod that drew up the statement of congregational polity known as the Cambridge Platform. The first Meeting house fell into disrepair, and in 1650, was replaced by a larger one in a new location.

Fearing that the settlements in Boston and Charlestown were dangerously exposed to attack by sea, Governor John Winthrop and his aides were determined to find an inland site to establish a new capital. A decision was made in 1630 to settle the new community at Newtowne (renamed Cambridge in 1638), and the construction of residences began in the following year. Events conspired to prevent Newtowne from becoming the next capital; however, the General Court, in 1636, appropriated funds for a college… and in 1637, appointed twelve of the most eminent men of the colony “to take order for a College at Newtowne”.

The area map at the right shows the relationship of Cambridge to its neighboring communities. The village proper, labeled”Towne” is protected by a fortification called the “Pallysadoe”. The Cambridge boundaries then stretched many miles into the wilderness and included present-day Brighton as well as Newton, south of the Charles River.

In 1632, a meeting house was constructed at the southwest corner of the present Mt. Auburn and Dunster Streets. Little is known of the characteristics of this building except that it had a bell with which to call the worshipers together. 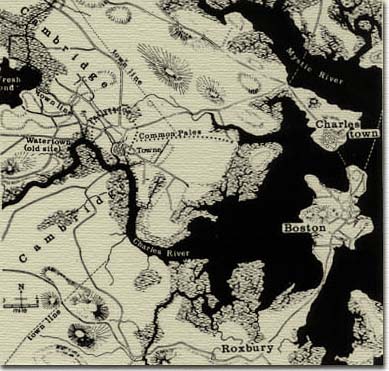 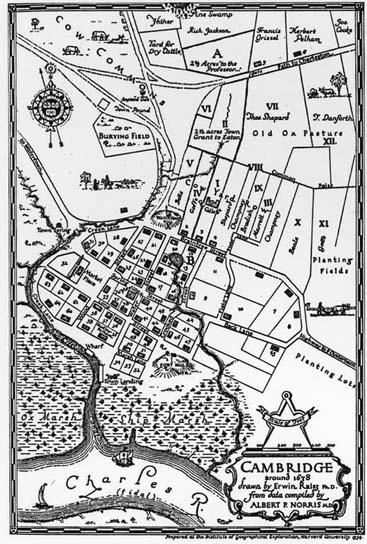 Prepared at the institute of Geographical Exploration.
Harvard University 1834.

A Survey of the Summe of Church-Discipline

Wherein, the Way of Churches of New-England is warranted out of the Word, and all Exceptions of weight, which are made against it, answered: whereby also it will appear to the Judicious Reader, that something more must be said, then yet hath been, before their Principles can be shaken, or they should, be, unsettled, in their practice.

By Tho. Hooker, late Pastor of the church at Hartford upon Connecticott in N.E.

Isa. 62. 1,
For Zions sake I will not hold my tongue: and for Jerusalems sake, I will not rest: until, be righteousness thereof break forth as the light, and the salvation thereof be as a burning lamp.

London,
Printed by A.M. for John Bellamy at the Three Golden Lions in Cornhill, near the Royall Exchange. MDCXLVIII.