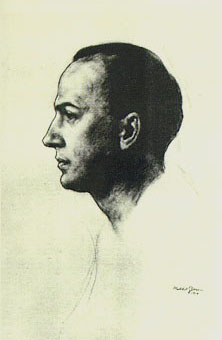 Bynner’s mother’s family extended to an early president of Harvard, Charles Chauncy. When Bynner was born in Brooklyn, his father was a civil engineer; his father died in 1891. Then living in Brookline, Massachusetts, he graduated from Harvard in 1902. Called “Hal” by his friends, he was invited by editor Wallace Stevens to become a member of the Harvard Advocate. Among his teachers were Royce (philosophy), Kittredge (Shakespeare), and Baker (drama), as well as his friend and professor poet George Santayana.

Upon graduating Bynner was for four years an editor of McClure’s in New York, where he paraded for women’s rights on Fifth Avenue with John Dewey. His poems, An Ode to Harvard, came out in 1907, and he was invited to be a Harvard Phi Beta Kappa poet. Edna St. Vincent Millay accepted his proposal for marriage, but after they reflected, they declined. Witter’s lover was a Swiss painter, Paul Theanaz.

In 1916 Hal coauthored Spectra: A Book of Poetic Experiments, parodies spoofing Imagism written under an assumed name. This act led embarrassed critics who had been fooled to ignore his later work. It helped that Alfred A. Knopf published his many books, starting with Beloved Stranger (1918). In 1917 came his first trip to Japan and China. He was president of the Poetry Society of America from 1921 to 1923.

Upon moving to the tiny town of Santa Fe, New Mexico, in 1922, he developed a friendship with D. H. and Frieda Lawrence. A later result was Journey with Genius: Reflections and Reminiscences Concerning the D. H. Lawrences.

In 1929 Witter collaborated with Kiang Kang-hu in translating Chinese poems: Jade Mountain: A Chinese Anthology. His most popular book was his translation of the 2,500 year-old The Way of Life According to Laotse (1944), an abstruse interpretation which somehow sold more than fifty thousand copies.

The poet died in Santa Fe after suffering a stroke following previous ills, near blindness (glaucoma), and prolonged painful shingles on the shoulders. James Kraft wrote a biography: Who is Witter Bynner? His remodeled home and gardens are now a bed and breakfast-the Inn of the Turquoise Bear.

The Works of Witter Bynner carries a critical introduction by Richard Wilbur.

The Poetry of Witter Bynner

DEFEAT
On a train in Texas German prisoners eat
With white American soldiers, seat by seat,
While black American soldiers sit apart,
The white men eating meat, the black men heart.
Now, with that other war a century done,
Not the live North but the dead South has won,
Not yet a riven nation comes awake.
Whom are we fighting this time, for God’s sake?
Mark well the token of the separate seat
It is again ourselves whom we defeat.

ROBERT FROST
(1874-1963)
They would have stayed there for farewell
Until the train pulled out
But he waved them away and they could tell
He knew what he was about.

The train held only strangers, yes,
But he was a stranger too-
When you say goodbye to friends who bless
They leave you only you.

WALT WHITMAN
That I in every man and he in me,
Together making God, are gradually creating whole
The single soul. . .
Somebody called Walt Whitman-
Dead!
He is alive instead.
Alive as I am. When I lift my head,
His head is lifted. When his brave mouth speaks,
My lips contain his word. And when his rocker creaks
Ghostly in Camden, there I sit in it and watch my hands grow old
And take upon my constant lips the kiss of younger truth. . .
It is my joy to tell and to be told
That he in all the world and me,
Cannot be dead,
That I, in all the world and him, youth after youth
Shall lift my head.

EPITHALAMIUM AND ELEGY
My single constancy is love of life:
Because we have entered no such formal pact
As dulls devotion between man and wife,
No bland acknowledgement, no binding fact,
No mingling of betrothal with divorce,
No dated bliss, no midnight certitude,
No sad necessity, no matter of course,
No pallid answer saying why we wooed;
Because she lets me love her as I can
Moment by moment, moments that always come
Beyond the calculation of a man
For joy or pain, for epithalamium
Or for elegy, and because, when I am spent,
Life shall have had her way, shall be content
Still to confer the sweet bewilderment
On someone else, shall loosen her lovely hair
To the wind, shall turn with bountiful intent
Toward anyone at all, and I not there,
Shall offer cool papayas, pale bamboo
And amorous guava to a later comer,
And none of her gifts, not even a drop of dew,
to me who had received them many a summer.
These are not harlotries but only joy,
These are the very tip-toes of delight.
This is the happiness she gives a boy,
With nothing of wickedness, nothing of spite,
In that immense, delicious, naked bed
Where anyone may lie, except the dead . . .
But I shall leave her. All that there is of rest
Shall be little enough, after so much of love;-
Wherever I move, she is there. Her open breast
Offers the tenderness I am dying of.
Her arm along my body like a snake
Has softly wound me into rings of sleep
And, every time again, stings me awake
And drowns me in her rhythms deep and deep . . .
Can I be tragical, in having had
My love of life by life herself subdued?
Since I am satiate with joy, can I be sad
In leaving? All that there is of solitude
Shall be little enough, after this vast embrace.
Give her some younger lover in my place.