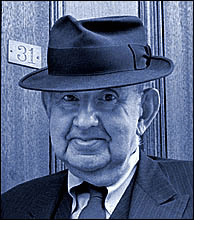 Playwright and Harvard professor William Alfred ’76, died in Cambridge on May 20, 1999. Alfred was the Abbott Lawrence Lowell Professor of the Humanities, Emeritus.

Born in Brooklyn, N.Y., in 1922, Alfred was the son of a bricklayer and a telephone operator. He was educated in parochial school and went on to Bryn College, where, he told the Boston Globe in a 1970 article, “all the commonplaces of my life were smashed, and thank God for that.” He served in the Army tank corps in World War II and received an M.A. in English from Harvard in 1949. He earned his Ph.D. at Harvard in 1954 and that year joined its faculty, becoming a full professor in 1963. In 1980 he was named Abbott Lawrence Lowell Professor of the Humanities, a position he held until his retirement in 1991. He was also a longtime tutor in Kirkland House.

Alfred, known to generations of Harvard students as, simply, “The Professor,” was a specialist in early English literature and taught a seminar on Beowulf described by former students as “legendary.” He was chairman of Harvard’s Standing Committee on Dramatics for many years, and he taught a course in playwriting. He was also a playwright and a poet.

His lyrical play, Hogan’s Goat, about turn-of-the-century Brooklyn-Irish politics, had a long and successful off-Broadway run in 1966 and provided a breakout role for actress Faye Dunaway, who became a lifelong friend of Alfred’s. Other works included Agamemnon, The Curse of an Aching Heart (also starring Dunaway), Nothing Doing, and Who to Love, a musical adaptation of Hogan’s Goat.

Though he was acclaimed and beloved both in academe and in the theater, Alfred said he often had misgivings about dividing his time between the two. “I feel a kind of double guilt,” he said in a Harvard University Gazette profile, a sense that the dual nature of his professional life hadn’t left him enough time for either side. But he clearly had an enormous influence on students who went on to careers in theater and film, including actors Tommy Lee Jones ’68, Stockard Channing ’65, John Lithgow ’67, and director Timothy Mayer ’66. Jones called Alfred “my best teacher, ever.” Alfred enjoyed long friendships with a number of accomplished actors and with writers such as Gertrude Stein, Archibald MacLeish, Robert Lowell, and Seamus Heany.

Alfred was the subject of numerous newspaper and magazine profiles, some of which captured his zest for the places he lived and the people he knew. Walking a New Yorker reporter around the Brooklyn neighborhood where he grew up, Columbia Heights, Alfred pointed out historic buildings and his old neighborhood sandwich shop with equal enthusiasm. “For fifteen cents,” he said, “you’d get ham and American cheese and tomatoes and lettuce and lots of mayonnaise on Italian bread. Those sandwiches were wonderful.” Alfred was among the most popular professors ever to teach at Harvard, and even after his retirement he continued to work with one undergraduate per year. “He was much beloved by generations of students, and by his colleagues, as well,” said English Department Chair Lawrence Buell.

William Alfred was the recipient of the New York Drama Desk Award and served on the poetry panels of the Pulitzer Prize and National Book Award committees. He was a member of the Medieval Academy of America, the Modern Language Association, ASCAP, and the Dramatists Guild. In addition to his plays, he was the author of a book of poems, The Annunciation Rosary, and a translation of Beowulf.

The Work of William Alfred

Note the power of this Irish-American dialogue between Kathleen and Stanton: This verse drama reached the public not only through performance on the stage but through television.

K: I slink to Sunday mass like a pavement nymph.
It’s three years now since I made my Easter duty,
Three years of telling Father Coyle that we
Receive at Easter mass in the cathedral,
Mortal sin on mortal sin, Matt. If I died,
I’d go to Hell–

K: You said that for three years.
What is it you’re afraid of ?

S:         Losing out.
You do not know these people as I do.
They turn upon the ones they make most of.
They would on me, if given half a chance.
And if it got around that we were married
in an English City Hall, lose out we would.

K: Matt, losing out? What profit for a man
to gain the world, and lose his soul?