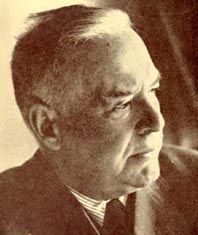 This poet-business executive, the son of Garrett Stevens and Margaretha Zeller, was born in Reading, Pennsylvania. His father was a lawyer who wrote occasional poems and newspaper articles. While a special student at Harvard from 1897 to 1900, Stevens was preparing to become a journalist. One of his friends was the poet Witter Bynner; another was Professor George Santayana, poet and philosopher. Stevens became president of the student poetry magazine, the Harvard Advocate. His reading then focused on Coleridge, Nietzsche, and Bergson. He was emphatically averse to traditional Christianity.

After failing as a journalist, he graduated from the New York Law School and practiced law unsuccessfully with several New York firms before joining the Hartford Accident and Indemnity Company in 1932, becoming the vice-president after 1934. His wife as of 1909, Elsie Moll, modeled for two United States coins which are no longer in circulation. Their daughter, Holly, was born in 1924. A tall dignified presence, Stevens often composed poems in his head during his cherished long walk to work. His first book of poems, Harmonium, published by Alfred A. Knopf, sold few copies. He was forty-four years old and stopped writing poems. Knopf later issued a new edition and also published additional runs of new poems in quantities of one thousand books: Ideas of Order, and Man with a Blue Guitar. Both Notes Toward a Supreme Fiction and Parts of the World were released in 1942. In 1945 Wallace Stevens was the Phi Beta Kappa poet at Harvard. He was now a recognized poet working in the Romantic tradition of Wordsworth and Keats: celebrating nature, rejecting supernaturalism, declaring that there is no healthy living which is exempt from pain and loss and death. There is no afterlife. Our immortality is the deathlessness of Nature, which is permanently worthy. He won his first National Book Award in 1951; his second, for his Collected Poems, in 1955.

While Stevens never traveled abroad, he went to Florida each year from 1922 on. His vacations were not tame like life in Hartford: Once he got into a fistfight with Ernest Hemingway, being knocked to the ground more than once until he wielded a blow to the novelist’s jaw which broke his own hand.

Though it may be difficult to believe, it has been said by some that in his last week in the hospital, when he was dying of inoperable cancer, Stevens was baptized Roman Catholic.

The Poetry of Wallace Stevens

SUNDAY MORNING
II
Why should she give her bounty to the dead?
What is divinity if it can come
Only in silent shadows and in dreams?
Shall she not find in comforts of the sun,
In pungent fruit and bright, green wings, or else
In any balm or beauty of the earth,
Things to be cherished like the thought of heaven?
Divinity must live within herself:
Passions of rain, or moods in falling snow;
Grievings in loneliness, or unsubdued
Elations when the forest blooms; gusty
Emotions on wet roads on autumn nights;
All pleasures and all pains, remembering
The bough of summer and the winter branch.
These are the measures designed for her soul.

NOTES TOWARD A SUPREME FICTION
IV
Two things of opposite natures seem to depend
On one another, as a man depends
On a woman, day on night, the imagined

On the real. This is the origin of change.
Winter and spring, cold copulars, embrace
And forth the particulars of rapture come.

Music falls on the science like a sense,
A passion that we feel, not understand.
Morning and afternoon are clasped together

And North and South are an intrinsic couple
And sun and rain a plural, like two lovers
That walk away as one in the greenest body.

In solitude the trumpets of solitude
Are not of another solitude resounding;
A little string speaks for a crowd of voices.

The partaker partakes of that which changes him.
The child that touches takes character from the thing,
The body, it touches. The captain and his men

Are one and the sailor and the sea are one.
Follow after, O my companion, my fellow, my self,
Sister and solace, brother and delight.