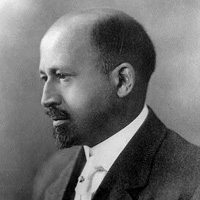 William Edward Burghart Du Bois was born and grew up in the overwhelmingly white town of Barrington, Massachusetts. His father-descended from mulatto slaves in Haiti-deserted his mother. Being precious, the child was not only the first African-American to graduate from the high school but also the first African-American to earn a doctorate from Harvard University, where he studied philosophy with William James and George Santayana before writing his doctoral dissertation in history on the African slave trade in America.

For fourteen years at a Atlanta University Du Bois taught the sociology of black America and wrote The Philadelphia Negro. His activist vitriolic critique of racism was expressed in twenty five years as editor of the National Association for the Advancement of Colored People magazine Crisis. He also penned The Souls of Black Folks, a biography of John Brown and autobiography, Dawn of Dusk.

Frustrated by the ongoing power of racism in America, Du Bois resigned from NAACP, grew sympathetic to Marzism and Soviet Russian Communism. After the Lenin Peace Prize, he decided to move to Ghana and work on an “Encyclopedia Africana” project. Before leaving America, he joined the Communist Party and became a citizen of Ghana where a volume of his poems was published. Living in Accra from 1961 to 1963, Du Bois died just as Americans joined the March for Freedom in Washington which his life helped to inspire.

The Writings of W.E.B. Dubois

A LITANY AT ATLANTA

O SILENT GOD, Thou whose voice afar in mist and mystery hath left our ears an hungered in these fearful days-
Hear us, good Lord!

Listen to us, Thy children: our faces dark with doubt are made a mockery in Thy sanctuary. With uplifted hands we front Thy heaven, O God, crying:
We beseech Thee to hear us, good Lord!

We are not better than our fellows, Lord, we are but weak and human men. When our devils do deviltry, curse Thou the doer and the deed: curse them as we curse them, do to them all and more than ever they have done to innocence and weakness, to womanhood and home.
Have mercy upon us, miserable sinners!

And yet whose is the deeper guilt? Who made these devils? Who nursed them in crime and fed them on injustice? Who ravished and debauched their mothers and their grandmothers? Who bought and sold their crime, and waxed fat and rich on public iniquity?
Thou knowest, good God!

Is this Thy justice, O Father, that guile be easier than innocence, and the innocent crucified for the guilt of the untouched guilty?
Justice, O judge of men!

Wherefore do we pray? Is not the God of the fathers dead? Have not seers seen in Heaven’s halls Thine hearsed and lifeless form stark amidst the black and rolling smoke of sin; where all along bow bitter forms of endless dead?
Awake, Thou that sleepest!

Thou art not dead, but flown afar, up hills of endless light, thru blazing corridors of suns, where worlds do swing of good and gentle men, of women strong and free-far from the cozenage, black hypocrisy and chaste prostitution of this shameful speck of dust!
Turn again, O Lord, leave us not to perish in our sin!

From lust of body and lust of blood
Great God, deliver us!

From lust of power and lust of gold,
Great God, deliver us!

From the leagued lying of despot and of brute,
Great God, deliver us!

A city lay in travail, God our Lord, and from her loins sprang twin Murder and Black Hate. Red was the midnight; clang, crack and cry of death and fury filled the air and trembled underneath the stars when church spires pointed silently to Thee. And all this was to sate the greed of greedy men who hide behind the veil of vengeance!
Bend us Thine ear, O Lord!

In the pale, still morning we looked upon the deed. We stopped our ears and held our leaping hands, but they-did they not wag their heads and leer and cry with bloody jaws: Cease from Crime! The word was mockery, for thus they train a hundred crimes while we do cure one.
Turn again our captivity, O Lord!

Behold this maimed and broken thing; dear God, it was an humble black man who toiled and sweat to save a bit from the pittance paid him. They told him: Work and Rise. He worked. Did this man sin? Nay, but some one told how some one said another did-one whom he had never seen nor known. Yet for that man’s crime this man lieth maimed and murdered, his wife naked to shame, his children, to poverty and evil.
Hear us, O Heavenly Father!

Doth not this justice of hell stink in Thy nostrils, O God? How long shall the mounting flood of innocent blood roar in Thine ears and pound in our hearts for vengeance? Pile the pale frenzy of blood-crazed brutes who do such deeds high on Thine altar, Jehovah Jireh, and burn it in hell forever and forever!
Forgive us, good Lord; we know not what we say!

Bewildered we are, and passion-tost, mad with the madness of a mobbed and mocked and murdered people; straining at the armposts of Thy Throne, we raise our shackled hands and charge Thee, God, by the bones of our stolen fathers, by the tears of our dead mothers, by the very blood of Thy crucified Christ: What meaneth this? Tell us the Plan; give us the Sign!
Keep not thou silence, O God!

Sit no longer blind, Lord God, deaf to our prayer and dumb to our dumb suffering. Surely Thou too art not white, O Lord, a pale, bloodless, heartless thing?
Ah! Christ of all the Pities!

Forgive the thought! Forgive these wild, blasphemous words. Thou art still the God of our black fathers, and in Thy soul’s soul sit some soft darkenings of the evening, some shadowings of the velvet night.

But whisper-speak-call, great God, for Thy silence is white terror to our hearts! The way, O God, show us the way and point us the path.

Whither? North is greed and South is blood; within, the coward, and without, the liar. Whither? To death?
Amen! Welcome dark sleep!

Whither? To life? But not this life, dear God, not this. Let the cup pass from us, tempt us not beyond our strength, for there is that clamoring and clawing within, to whose voice we would not listen, yet shudder lest we must, and it is red, Ah! God! It is a red and awful shape.
Selah!

In yonder East trembles a star.
Vengeance is mine; I will repay, saith the Lord!
Thy will, O Lord, be done!
Kyrie Eleison!

Lord, we have done these pleading, wavering words.
We beseech Thee to hear us, good Lord!

We bow our heads and hearken soft to the sobbing of women and little children.
We beseech Thee to hear us, good Lord!

Our voices sink in silence and in night.
Hear us, good Lord!

In night, O God of a godless land!
Amen!