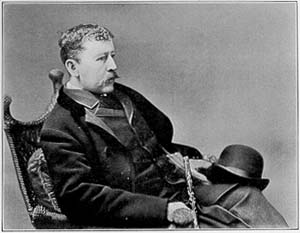 The “Boston-plated” poet was born in Portsmouth, New Hampshire, in 1836. He lived in New York City and New Orleans before returning to his grandfather’s home in Portsmouth in order to prepare for college at Harvard. When his father died that dream failed, so Aldrich began to work in his uncle’s New York countinghouse in 1852. Nevertheless, he was only nineteen when he published his first book of poems: The Bells: A Collection of Chimes. He rapidly moved into the New York literary world when he began writing and editing for The Evening Mirror and The Home Journal.

Soon, the leading publishing house in America, Ticknor and Fields, published The Poems of Thomas Bailey Aldrich, and he became editor of Every Saturday in Boston. He also now issued as a book A Story of a Bad Boy who ran away to sea. Since Aldrich had been accepted by the literary aristocracy of New England, he spoke of himself as “Boston-plated.” His witty, humorous verse, along with his socially adept wife, Lillian Woodman, were appreciated by Longfellow, Lowell, Holmes, and Emerson. Even Charles Dickens paid him a visit. Aldrich became the editor of the Atlantic Monthly, publisher of New England’s leading authors.

As Aldrich’s light verse and witty stories delighted the literary public, he began to be ranked with Longfellow, Holmes, and Lowell. In one poll he outranked Mark Twain and Walt Whitman in popularity. Harvard awarded him an honorary degree. Nevertheless, Thomas Bailey Aldrich rightly realized that his fame would be brief. He knew he was out of fashion when such voices as Vachel Lindsay, T.S. Eliot, and Carl Sandburg initiated a new non-conservative literary style.

When I behold what pleasure is Pursuit,
What life, what glorious eagerness, it is;
Then mark how full Possession falls from this,
How fairer seem the blossom than the fruit,–
I am perplexed, and often stricken mute,
which attained the higher bliss,
The wingéd insect, or the chrysalis
It thrust aside with unreluctant foot.
Spirit of verse, which still eludes my art,
You shapes of loveliness that still do haunt me,
O never, never rest upon my heart,
If when I have thee I shall little want thee!
Still flit away in moonlight, rain, and dew,
Will-o’-the-wisp, that I may still Pursue!