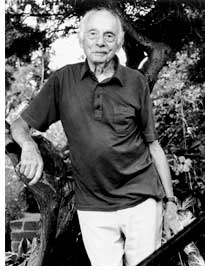 Born in Worcester, Massachusetts in 1905, America’s tenth poet laureate was the son of an immigrant from Lithuania who committed suicide in a public park a few weeks before his son’s birth, after his dress-making business was bankrupt. His mother began a dry-goods shop. His beloved step-father died when Stanley was fourteen.

At the classical High School education in Worcester, Kunitz’s love of poetry (by Keats, Wordsworth, and William Blake) began. Then at Harvard he learned that despite his honors at graduation, he discovered that he would not be able to teach the Anglo-Saxon students because he was Jewish.

The first Kunitz book of poems, Intellectual Things, 1930, was ignored, followed fourteen years later by Passport to War. However, after another fourteen years, his Selected Poems won the Pulitzer Prize.

Avoiding teaching, Kunitz worked as an editor, Especially co-editing a series of biographical reference books for The H.W. Wilson Company. In 1945 Bennington College invited him to begin teaching. A variety of other teaching posts followed, especially at Columbia University’s graduate writing program, where he had ample time to write poems. Many awards followed plus serving as consultant in Poetry at the Library of Congress.

Kunitz lived in Greenwich Village, with Summers in Provincetown, where his large terraced garden faced the bay. An editorial in The Boston Globe celebrated “Stanley Kunitz at 100.”

The Poetry of Stanley Kunitz

Summer is late, my heart.
Words plucked out of the air
some forty years ago
when I was wild with love
and torn almost in two
scatter like leaves this night
of whistling wind and rain.
It is my heart that’s late,
it is my song that’s flown.
Outdoors all afternoon
under a gunmetal sky
staking my garden down,
I kneeled to the crickets trilling
underfoot as if about
to burst from their crusty shells;
and like a child again
marveled to hear so clear
and brave a music pour
from such a small machine.
What makes the engine go?
Desire, desire, desire.
The longing for the dance
stirs in the buried life.
One season only,
and it’s done.
So let the battered old willow
thrash against the windowpanes
and the house timbers creak.
Darling, do you remember
the man you married? Touch me,
remind me who I am.