The History of Cambridge: Shepard Through Brattle

4. Years from Shepard Through Brattle 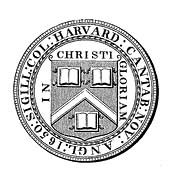 The Second Harvard Seal, 1650. From The Harvard Book: A Series of Historical, Biographical, and Descriptive Sketches (1875).

In 1650, the General Court gave the College its first charter, appointing a Corporation, consisting of the President, five Fellows, and the Treasurer. This board, and that previously mentioned, now denominated the board of Overseers, constitute the legislature of Harvard University. (54)

Cambridge appears, at this time, to have bestowed some attention on navigation; for an early historian mentions “a ship, built and set forth by the inhabitants of Cambridge,” in 1649, as being “split and cast away.” The same historian, who composed his history in 1652, says of Cambridge: “This town in compact closely within itselfe, till of late yeares some few stragling houses have been built. The liberties of this town have been inlarged of late in length, reaching from the most northerly part of Charles river, to the most southerly part of Merrimeck river. (55) It hath well ordered streets and comly compleated with the faire building of Harvard Colledge. The people of this Church and Towne have hitherto had the chiefest share in spiritual blessings, the ministry of the word by more than ordinary instruments: Yet are they at this day in a thriving condition in outward things, also both corne and cattell, neate, and sheepe, of which they have a good flocke, which the Lord hath caused to thrive much in the latter dayes than formerly.” 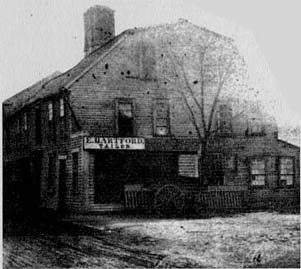 The Third Blue Anchor Tavern, 1737, a popular spot near Harvard Square for almost 100 years. From The Inns and Pubs of Cambridge. 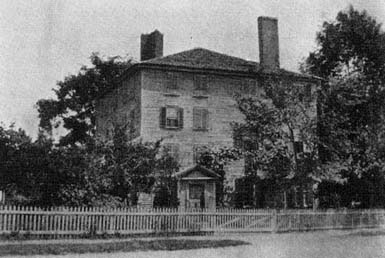 Cockfighting was one of the treats near the Richardson-Bird Tavern in Watertown in the 1700’s. From The Inns and Pubs of Cambridge.

The first license for an inn, in Cambridge, appears to have been given in 1652, when “the townsmen granted liberty to Andrew Belcher, to sell beare and bread, for entertainment of strangers, and the good of the towne.” (56)

The inhabitants of Cambridge Village had become so numerous, by the year 1656, as to form a distinct congregation for public worship; and an annual abatement was made of “the one halfe of their proportion to the ministryes allowance, dureing the time they were provided of an able minister according to law.” (57) 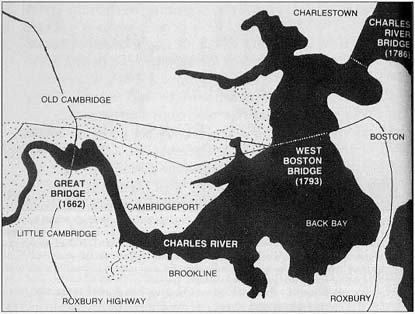 Map of the Charles River Basin in 1800. From The Charles: A River Transformed.

The same year, the inhabitants of Cambridge consented to pay each his proportion of a rate to the sum of 200 pounds “towards the building a bridge over Charles River.” (58) A bridge was erected, about the year 1660, and, for many years, was called “The Great Bridge.” Not long after its erection, it was ordered that it should be “layd in oyle and lead.” (59)

About this time, there was built in the town, “a house of correction:” which, in conjunction with other facts, indicates the early care of our ancestors to repress idleness and vice, and to encourage industry and economy. In 1656, certain persons were appointed by the selectmen, to execute the order of the General Court, for the improvement of all the families within the limitts of this towne, in spinning and cloathing.” (60) The year following, James Hubbard had “liberty granted him to sell some small timber on the common, for the making him a loome.” (61)

Orchards must have been succesfully cultivated, as early as the year 1662; for Mr. Mitchel was then “granted a tree for a cider press;” and James Hubbard “timber for fencing his orchard.” (62)

In September, 1665, five Mohawk Indians, “all stout and lusty young men,” came, in the afternoon, into the house of Mr. John Taylor, in Cambridge. They were seen to come out of a swamp not far from the house. Each of them had a firelock gun, a pistol, and a helved hatchet, a long knife hanging about his neck, and a pack, well furnished with powder, and bullets, and other necessary implements. The family giving immediate notice to the authority of the town, a constable, with a party of men, came to the house, and seized them without any resistance, and, by authority, committed them to prison. The English had heard much of the Mohawks, but had never seen any of them before. “At their being imprisoned, and their being loaden with irons, they did not appear daunted or dejected; but, as the manner of those Indians is, they sang night and day, when they were awake.” Within a day or two after, they were removed from Cambridge to Boston prison, and were repeatedly examined by the Court, then in session. They alleged that they came not with any intention to do the least harm to the English, but to avenge themselves of the Indians, their enemies. The Court, at length dismissed them, with a letter to their chief sachem, the purport of which was, to forbid the Mohawks, for the future, to kill any of the Indians under the protection of the English, and to come armed into any of the English towns. With this letter, and a convoy of horse to conduct them into the woods, clear of the Indians, their enemies, they were dismissed, and were heard of no more. (63)

To the moral and religious education of the children and youth in Cambridge, there appears to have been a regular and systematic attention. In 1668, some of the most respectable inhabitants were chosen “for katechiseing the youth of this towne.” (64)

Mr. Mitchel died in 1668. “At a public meeting of the Church and Town,” in 1669, “to consider of supply for the ministry, it was agreed, That there should be a house bought or built, to entertain a minister.” (65) For this purpose, the parish, the same year, sold “the church’s farm,” of six hundred acres, in Shawshin, (Billerica) for 230 pounds sterling. Four acres of land were, soon after, purchased; on which, in 1670, a house was erected thirty-six feet long, and thirty feet wide, “this house to remaine the church’s, and to be the dwelling place of such a minister and officer, as the Lord shall be pleased to supply us withall, during the time he shall supply that place amongst us. (66)

The church and Society now invited Mr. William Stoughton (67) to become their minister; “but they were denied. After some time of seeking God by prayer, the Lord was pleased to guide the church to make their application to Mr. Urian Oakes in Old England.” Mr. William Manning was sent as a messenger with a letter from the church, and with another letter “sent by several Magistrates and Ministers, to invite him to come over and be an officer amongst them.” (68) Mr. Oakes accepted the invitation, came to America, and was inducted into the office in 1671. In 1675, he was invited to the presidency of Harvard College, and was inducted into that office the same year. The charge of his flock, however, he did not entirely relinquish till his death.

In 1675, the selectmen appointed certain persons “to have inspection into familyes, that theare be noe by drinking or any misdemenor wheareby fine is committed, and persons from theare houses unseasonably.” (69)

At a town meeting, in 1676, called “to consider about fortifieing of the towne against the Indians, “ it was judged necessary, “that something bee done for the fencing in the towne with a stockade, or sume thing equivalent.” Materials were, accordingly prepared: but king Philip’s war being soon after terminated, the town ordered that the selectmen should “improve the timber, that was brought for the fortification, for the repairing of the Great Bridge.” (70) This bridge was rebuilt in 1690, at the expense of Cambridge and Newton, with some aid from the public treasury.

The extent of the town, and the provident and pious attention of its inhabitants to the support of the ministry, appear by a vote of January 8, 1682: “That 500 acres of the remote lands, lying between Woburn, Concord and our head line, shall be laid out for the use and benefit of the ministry of this town and place, and to remain for the use forever.” (71)

Mr. Oakes died in 1681. Mr. Nathaniel Gookin, who had been employed by the society as his assistant, during the latter part of his ministry, was now chosen his successor. He was ordained in 1682. He died in 1692.

Not long after his death, the church and society unanimously invited the celebrated Dr. Increase Mather to succeed him, in the ministry: but the reluctance of his people, (among whom he had then ministered 36 years) with other obstacles, prevented his acceptance of the invitation. 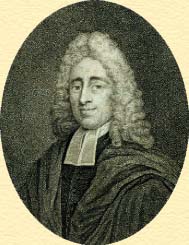 The Reverend William Brattle was, at length, chosen to this office; and was ordained in 1696. During his ministry, a formal and public relation of religious experiences, as a qualification for church fellowship, was, by a vote of the church, declared unnecessary; the business of examination was referred to the pastor and elders; and the consent of the church to the admission of a member was signified by silence, instead of a manual vote.

In 1700, the proprietors of the common and undivided lands in Cambridge gave the high way on the south side of Charles river, from the river to the road now leading to Roxbury, “for the use of the ministry in this town and place.” (72) This highway lay to the eastward of the present one, on the south side of the river. Before the erection of the first bridge over Charles river, there was a ferry, from the wharf at Water Street, in Cambridge, to this highway.

In 1706, the third church was erected in Cambridge, a little in front of the spot where the present church stands; and the first divine service was performed in it on the 13th of October.

On the petition of the farmers, “that they might be dismissed from the town, and be a township by themselves;” leave was given them, on certain conditions; and Cambridge Farms were incorporated, by the name of Lexington, in 1712. (73) Mr. Brattle died in 1717.

55 ^ Cambridge appears, in the first instance, to have contained merely a sufficient tract of land for a fortified town. Hence the early tendency of its inhabitants to emigration. By this second enlargement, it appears to have included the territory constituting the principal part of the present township of Billerica, and the whole township of Lexington; the former of which was incorporated May 29, 1655, and the latter, March 20, 1712. Cambridge Village was incorporated, by the name of Newton, December 8, 1691.

67 ^ The Honourable William Stoughton, Esquire, was preacher of the gospel for several years. His Sermon, at the annual Election, has been ranked among the very best, delivered on that occasion. His Epitaph (which Mr. Clap, the late venerable town-clerk of Dorchester, told me, in his cautious manner, he believed may have been written by the Rev. Mr. Mather, of Dorchester) ascribes to him these traits:

With these excellent qualifications, however, he was never settled in the ministry. But, in civil life, he was eminently useful to the Commonwealth. He was repeatedly chosen its Lieut. Governor; and for many years, was Commander in chief. He was a generous benefactor to Harvard college. Stoughton Hall was erected at his expense. See his Epitaph entire in Hist. Collections, II. 10.