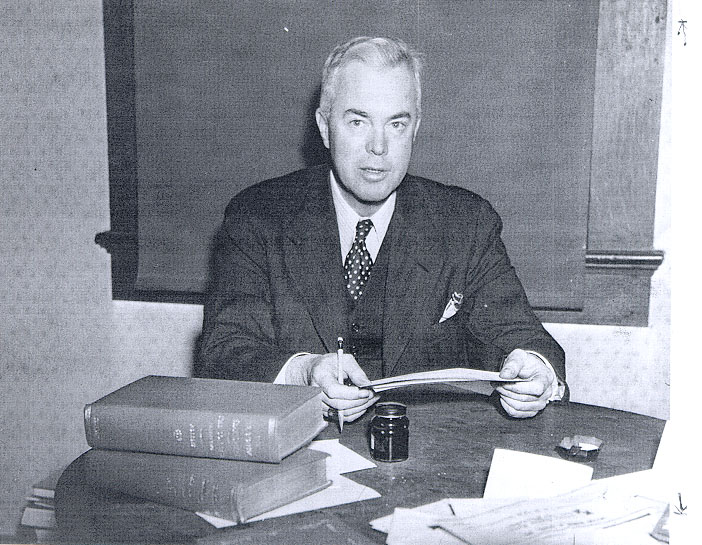 In 1937 Robert Hillyer was named Boylston Professor of Rhetoric and Oratory at Harvard, the chair first held by John Quincy Adams. Born in 1895 and retiring in 1944 to Old Greenwich, Connecticut, Hillyer spoke concisely of the contemporary academic situation in these classic lines from “A Letter to James. B. Munn”:

How often do I see in our profession
Learning a mere extraneous possession,
A self-sufficient mass of dates and sources
Rolled round in academe’s diurnal courses,
Where scholars prepare scholars, not for life
But gaudy footnotes and a threadbare wife—
Keen eyes for errors in a worthless text,
But none at all for this world or the next. . .
Oh, that our living literature could be
Our sustenance, not archaeology!

Hillyer, a member of an old Connecticut family, graduated from Harvard in 1917, where he was editor of the Harvard Advocate. That same year he published Sonnets and Other Lyrics before becoming an ambulance driver in World War I along with John Dos Passos, a Harvard friend.

Serving as a Harvard English instructor in 1919, he described himself as “a conservative and religious poet in a radical and blasphemous age.” He published The Five Books of Youth and Alchemy: a Symphonic Poem. After spending a year in Copenhagen, he and classmate S. Foster Damon translated a Book of Danish Verse (1922). He married Dorothy Hancock Tilton in 1926 and that year returned to Harvard. They had one son. In 1937 he was promoted to Boylston Professor. His published books included his Collected Verse (1933), which won a Pulitzer Prize. 1943 marked his divorce. In 1945 he left Harvard and taught at Kenyon College and the University of Delaware.

While serving as president of the Conservative Poetry Society of America, he waged literary war against such modernist poets as Ezra Pound and T. S. Eliot. The Cantos of Pound, Hillyer declared, express contempt for America. To honor Pound’s poems, he concluded, was to support a fascist conspiracy against American ways of life. Robert Frost called Pound’s poems an “unendurable outrage.”

The Poetry of Robert Hillyer

Here are a few poems issued in the Collected Poems of Robert Hillyer (1961) by Alfred A. Knopf:

THE SCAR
For forty years and more my hand has shown
The scar where once a fishhook tore the flesh.
The body bears these grudges of its own.
The mind would let them go, but scars refresh
Unwilling memory. Owing to this mark,
One summer moment at Menemasha Bight
Stays with me like a date cut in the bark
Of some old tree, though not another sight
Remains from that day, nor would any thought,
Except for this indelible reminder.
Each seven years a bodily change is wrought,
Yet cells renew the scar. The heart is kinder
That wears its wounds invisible until
All names are lost, lacking a cicatrice.
The hand recalls the embedded fishhook still,
When love and memory long have been at peace.

A MEMORY
Skipping flat pebbles over the dark pond—
One of yours flipped nine times before it sank—
We watched the ripples spread, round after round,
Until the circles broke against the bank.
We played until the sun set, and the dank
Mist, heavy with the spicy smell of fern,
Rose from the reeds and warned us to return.

Of lives that intersect, then go their way,
At last to lose themselves alone against
The shores of silence, our brief hours of play
Seem now the symbol: the bright memory fenced
With deep, oblivious forest, and condensed
Into one flash, one fragmentary scene
That skips the surface of the years between.

You had a decade left that afternoon
Before you were to die in the first war;
But deep within me, like a sealed cocoon,
The memory clung, for fifty years and more,
To open for one sudden flight and soar
Into this moment lost in time beyond
Two small boys skipping pebbles over the pond.

THE VICTIM
The hummingbird that darts and hovers
Made one fatal dart&mdash alas!&mdash
Against a counterfeit of flowers
Reflected in the window glass.
When four-o’-clocks had sunk in shadow,
The window caught an extra glint
Of color, like the sudden rainbow
Arching the purple firmament.
Transcendent are the traceries
Illusion weaves to set a snare;
The quick competitor of bees,
Trusting his universe of air
For flight and honey dazzled so
In quest of sweetness, was waylaid
By something hard that had a glow
Brighter that that the garden made.
Illusion shatters; the ideal
Is much more ruthless than the real.
The visionary hummingbird
Hit nothingness, and hit it hard.

THE TERMITES
Blind to all reasoned aim, this furtive folk
Breed to destroy, destroy to breed once more,
As they go gnawing tunnels in the floor
That turn to yellow dust as fine as smoke.
Sometimes a hushing slide within the core
Of beams gave a warning where some fiber broke,
And someone said, “This house is solid oak:
No fear, it’s stood two centuries and more.”
And still the midnight work advanced and still
The sleepers in their forbears’ house slept on,
Till the house sank and vanished; roof to sill,
It fell to dust—all but the termites gone;
And these devoured each other or took flight
To scatter more destruction through the night.

A LETTER TO ROBERT FROST
(Abridged from his Phi Beta Kappa poem at Columbia University in 1936)
Our friendship, Robert, firm through twenty years,
Dares not commend these couplets to your ears:
How celebrate a thing so rich and strange—
Two poets whose affection does not change;
Immune to all the perils Nature sends,
World war and revolution and kind friends.
Something there is that doesn’t love a wall;
Your apples and my pines knew none at all,
But grow together in that ghostly lot
Where your Vermont meets my Connecticut.
Ours is a startling friendship, because art,
Mother of quarrels who tears friends apart,
Has bound us ever closer, mind and heart.

DEAD MAN’S CORNER
Here is the crossroads where the slain
Were piled so deep we could not pass.
Now dreams alone renew the stain
Of blood long soaked into the grass.

If ambulance to save the maimed
Or gunwagon to maim the sound,
Both must proceed, while rightly named
The Mort Homme darkens all the ground.

As long ago wheels took the groove
In necessary roads again,
Crunching the bones that could not move
To move the limbs of living men;

With cracked and beaten lips that taste
Commands like acid but obeyed,
We still with leaden nightmare haste
Convey our shadows through the shade.

War is a most forgotten fear
But peace will not be out of mind.
We drive our ambulances here
God help us! and the road is blind.

LETTERS
O that our living literature could be
Our sustenance, not archaeology! . . .
My scholar shall be brilliantly forbidden
to dig old garbage from a kitchen midden . . .
Far better Alexandria in flames
Than buried beneath unimportant names;
And even Sappho, glory that was Greece’s,
Lives best, I blasphemously think, in pieces.
That Chinese Emperor who burned the books
Succumbed to madness shrewder than it looks;
The minor poets and the minor sages
Went up in smoke. The great shine down the ages.

— Excerpted from the Collected Poems of Robert Hillyer (1961) by Alfred A. Knopf.