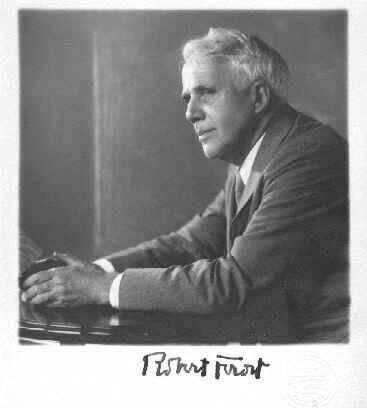 In Boston on January 29, 1963, America’s unofficial poet laureate, Robert Frost, died. As was true of another citizen of the world, Ernest Hemingway, uncommonly historic words of deep appreciation came from the Kremlin and the White House. The Premier’s words bespoke the poet’s love of the common people and his contribution to our world civilization. The President focused on Frost’s universally local qualities: his love of nature, his plain speech, his canny wisdom, his insight into the soul. “He had promises to keep, and miles to go, and now he sleeps.”

The poet of freedom knew tragic joy for 88 years. His days were not devoid of tears, though some have thought he was unduly optimistic. His father died when he was ten. His first son, Eliot, died at four. His daughter, Marjorie, married and then died from a childbirth infection. He lived for 25 years after Mrs. Frost died. Five years after her death their other son, Carol-“who had the seeds of genius in him”-destroyed himself. Another daughter was an invalid. Robert Frost was not unacquainted with sorrow, but he never tried to be a conqueror of nature, nations, or God. He was a person of power. Instead of cursing God, he joked with Him. By laughing at himself, he taught us how to trust. Somehow he had a way of ministering by awakening wisdom in us.

Some say his work is rural and leads folks not to seek to solve complex problems, but only to escape from social responsibility. Perhaps that word is something less than altogether fair. It is true that Robert Frost was neither radical nor conservative. I’ve heard him smile and say,

I never dared be radical when young
For fear it would make me conservative when old.

Still, he may for all that have been true to life’s classic balance wheel. He was a realist who spoke of a star:

It asks of us a certain height,
So when at times the mob is swayed
To carry praise or blame too far,
We may choose something like a star
To stay our minds on and be staid.

The star to which he pointed was larger than the eye could ever see. Nevertheless, he himself has been a steady and steadying star which not a few of us have seen at night since we were young. We never learned how not to honor him.

Robert Frost’s poetry hides and reveals the classic motto of universal sanity and health: Never too much! His life shows forth a joyful secret: Love Life without reserve; and be not ashamed to be a swinger of birches.

Yes, he sold all he possessed to buy one treasure, and his purchase has enriched the world. He put his money on the Power which is somewhere-nowhere-everywhere and endless.

The Poetry of Robert Frost

BIRCHES
When I see birches bend to left and right
Across the lines of straighter darker trees,
I like to think some boy’s been swinging them.
But swinging doesn’t bend them down to stay
As ice-storms do. Often you must have seen them
Loaded with ice a sunny winter morning
After a rain. They click upon themselves
As the breeze rises, and turn many-colored
As the stir cracks and crazes their enamel.
Soon the sun’s warmth makes them shed crystal shells
Shattering and avalanching on the snow-crust–
Such heaps of broken glass to sweep away
You’d think the inner dome of heaven had fallen.
They are dragged to the withered bracken by the load,
And they seem not to break; though once they are bowed
So low for long, they never right themselves:
You may see their trunks arching in the woods
Years afterwards, trailing their leaves on the ground
Like girls on hands and knees that throw their hair
Before them over their heads to dry in the sun.
But I was going to say when Truth broke in
With all her matter-of-fact about the ice-storm
I should prefer to have some boy bend them
As he went out and in to fetch the cows–
Some boy too far from town to learn baseball,
Whose only play was what he found himself,
Summer or winter, and could play alone.
One by one he subdued his father’s trees
By riding them down over and over again
Until he took the stiffness out of them,
And not one but hung limp, not one was left
For him to conquer. He learned all there was
To learn about not launching out too soon
And so not carrying the tree away
Clear to the ground. He always kept his poise
To the top branches, climbing carefully
With the same pains you use to fill a cup
Up to the brim, and even above the brim.
Then he flung outward, feet first, with a swish,
Kicking his way down through the air to the ground.
So was I once myself a swinger of birches.
And so I dream of going back to be.
It’s when I’m weary of considerations,
And life is too much like a pathless wood
Where your face burns and tickles with the cobwebs
Broken across it, and one eye is weeping
From a twig’s having lashed across it open.
I’d like to get away from earth awhile
And then come back to it and begin over.
May no fate willfully misunderstand me
And half grant what I wish and snatch me away
Not to return. Earth’s the right place for love:
I don’t know where it’s likely to go better.
I’d like to go by climbing a birch tree,
And climb black branches up a snow-white trunk
Toward heaven, till the tree could bear no more,
But dipped its top and set me down again.
That would be good both going and coming back.
One could do worse than be a swinger of birches.

FIRE AND ICE
Some say the world will end in fire,
Some say in ice.
From what I’ve tasted of desire
I hold with those who favor fire.
But if it had to perish twice,
I think I know enough of hate
To know that for destruction ice
Is also great
And would suffice.

THE TUFT OF FLOWERS
I went to turn the grass once after one
Who mowed it in the dew before the sun.

The dew was gone that made his blade so keen
Before I came to view the leveled scene.

I looked for him behind an isle of trees;
I listened for his whetstone on the breeze.

But he had gone his way, the grass all mown,
And I must be, as he had been,-alone,

“As all must be,” I said within my heart,
“Whether they work together or apart.”

But as I said it, swift there passed me by
On noiseless wing a bewildered butterfly,

Seeking with memories grown dim over night
Some resting flower of yesterday’s delight.

And once I marked his flight go round and round,
As where some flower lay withering on the ground.

And then he flew as far as eye could see,
And then on tremulous wing came back to me.

I thought of questions that have no reply,
And would have turned to toss the grass to dry;

But he turned first, and led my eye to look
At a tall tuft of flowers beside a brook,

I left my place to know them by their name,
Finding them butterfly-weed when I came.

The mower in the dew had loved them thus,
By leaving them to flourish, not for us,

Nor yet to draw one thought of ours to him,
But from sheer morning gladness at the brim.

The butterfly and I had lit upon,
Nevertheless, a message from the dawn,

That made me hear the wakening birds around,
And hear his long scythe whispering to the ground,

And feel a spirit kindred to my own;
So that henceforth I worked no more alone;

But glad with him, I worked as with his aid,
And weary, sought at noon with him the shade;

And dreaming, as it were, held brotherly speech
With one whose thought I had not hoped to reach.

THE ROAD NOT TAKEN
Two roads diverged in a yellow wood,
And sorry I could not travel both
And be one traveler, long I stood
And looked down one as far as I could
To where it bent in the undergrowth;

Then took the other, as just as fair,
And having perhaps the better claim
Because it was grassy and wanted wear;
Though as for that, the passing there
Had worn them really about the same,

And both that morning equally lay
In leaves no step had trodden black.
Oh, I marked the first for another day!
Yet knowing how way leads on to way
I doubted if I should ever come back.

I shall be telling this with a sigh
Somewhere ages and ages hence:
Two roads diverged in a wood, and I,
I took the one less traveled by,
And that has made all the difference.

Robert Frost: A Prayer in Spring