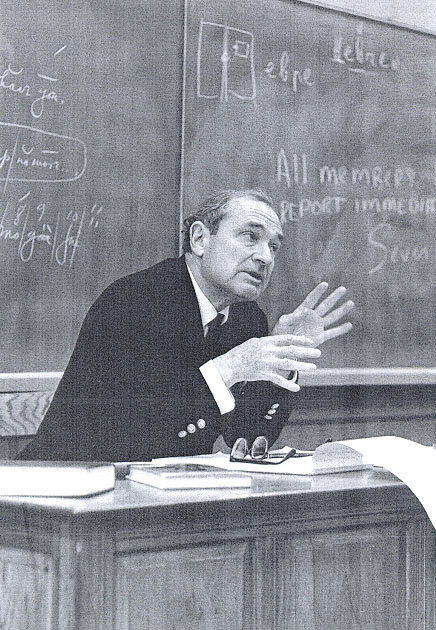 The poet was a journalist as well as a professor of English who is celebrated for his eminent translations of both Greek and Latin classics. Though born in Geneva, New York, Fitzgerald grew up in Springfield, Ilinois. His Irish-American born parents were actors. His mother died when he was three; his father died when he was seventeen. Vachel Lindsay, a townsman who was a poet, encouraged his writing.

The year before he went to college at Harvard, Robert Fitzgerald met fellow poet Dudley Fitts at the Choate School. They later saw a painful performance of Alcestis by Euripedes which enticed them to try a joint translation. When Harcourt Brace published it, classicist Edith Hamilton exclaimed it was the best translation of a Greek play she had ever read.

After graduating from Harvard in 1933, Fitzgerald was a journalist reporting for the New York Herald Tribune before switching to Time magazine’s staff in 1936. A close friend then was fellow poet James Agee.

During World War II Fitzgerald served in the Navy on the staff of the Commander in Chief for the Pacific Ocean areas, including Pearl Harbor.

After teaching English at Sarah Lawrence and Princeton, he was The New Republic‘s poetry reviewer. Fitzgerald then lived and wrote in Italy, where he thereafter continued to maintain a home for his large family. When he was appointed Boylston Professor of Rhetoric and Poetry at Harvard in 1965, Cambridge was the home base for his teaching, writing, and the translating of still-in-print translations of such classics as Homer’s The Odyssey, the Oedipus Cycle of Sophocles, the Aneid of Virgil.

The Poetry of Robert Fitzgerald

To those whose nostrils ache with the strong darkness

Those who in hunger press against the waters,

Those without birth or death, to whom the cold
Ocean long laboring in her regal womb
Whispers a word of foam.

The lavish cars
Move westward in an eddy and dance of shadow
Under the dazed lamps on the lifeless shore.

COSMOLOGY
Lifting yesterday’s body in the light:
Wide lonely circles and the head a stone,
A planet picked out in exploded night.
The clouds are clouds of stars, the calmly grown

Flower of time assumes its sudden stem.
In this heavenly surf the world is hung
Without a sound and lustrous like a gem,
The vision that is not inscribed nor sung.

LIGHTNESS IN AUTUMN
The rake is like a wand or fan,
With bamboo springing in a span
to catch the leaves that I amass
In bushels on the evening grass.

The sun is down, the air is blue,
And soon the fingers will be, too,
But there are children to appease
With ducking in those leafy seas.

So loudly rummaging their bed
On the dry billows of the dead,
They are not warned at four and three
Of natural mortality.

Before their supper they require
A dragon field of yellow fire
To light and toast them in the gloom.
So much for old earth’s ashen doom.