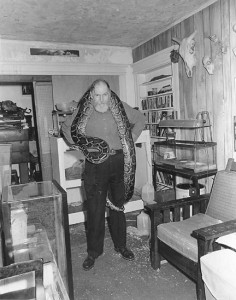 Rick Stafford has been a part of the Harvard Scene as an employee. He was born in Newton, Massachusetts in 1932. His parents were both professional oil painters. As a teenager he did odd jobs on Saturday mornings for Arthur Loveridge, the Curator of the reptile collection at the Museum of Comparative Zoology. He was paid one preserved specimen per hour of work.

Rick was first employed at the Biological Laboratories in 1950 as an animal caretaker. Then after serving in the Army as a Signal Corps photographer from 1953-1955, he returned as a photographic technician for Professor Keith Porter, the electron microscopist at the Biological Laboratories. It was at this time that the student unrest related to issues of the Vietnam War began to erupt on campus. He photographed some of the earliest demonstrations and began to look for a place to publish his photographs within the University. He met David Cudhea, who was expanding the Harvard Gazette, a weekly calendar of Harvard events, to be the voice of the Harvard News Office. Before long, Stafford was photographing for the Gazette. His work also appeared in Harvard Magazine, a publication for the alumni, and also in Harvard Business School and various Radcliffe publications. Eventually he became University Photographer for the Harvard News Office.

The work was rewarding but demanding. Stafford resigned to become a photographer for the Harvard Art Museums until he retired in 1990.

The Harvard Gallery of Photographs by Rick Stafford