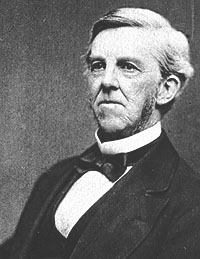 Holmes was the Portman Professor of Anatomy at Harvard Medical School, a pioneer advocate of the scientific method in medical practice.

He was a member of the Saturday Club, meeting with such poets as Ralph Waldo Emerson, James Russell Lowell, John Greenleaf Whittler, and Henry Wadsworth Longfellow. He not only wrote for The Atlantic Monthly but provided the name for the periodical.

Dr. Holmes once described himself: “as inveterally rooted an American of the Boston variety as ever saw himself mirrored in the frog pond.”

A master of occasional poetry such as “The Cambridge Churchyard” and “Old Ironsides”,which he wrote while at Harvard College – he’s the classic author of “The Chambered Nautilus” as well as a father of light verse in America. Since people were preparing for the End of the World when Haley’s Comet appeared, he wrote this:

LATTER-DAY WARNING
When legislators keep the law,
When banks dispense with bolts and locks,
When berries – whortle, rasp, and straw —
Grow bigger downwards through the box,-

When he that selleth house or land
Shows leak in roof or flaw in right-,
When haberdashers choose the stand
Whose window hath the broadest light,-

When preachers tell us all they think,
And party leaders all they mean,-
When what we pay for that we drink,
From real grape and coffee-bean,–

OLD IRONSIDES
Ay, tear her tattered ensign down!
Long has it waved on high,
And many an eye has danced to see
That banner in the sky;
Beneath it rung the battle shout,
And burst the cannon’s roar; —
The meteor of the ocean air
Shall sweep the clouds no more!

Her deck, once red with heroes’ blood,
Where knelt the vanquished foe,
When winds were hurrying o’er the flood,
And waves were white below,
No more shall feel the victor’s tread,
Or know the conquered knee; —
The harpies of the shore shall pluck
The eagle of the sea!

Oh, better that her shattered bulk
Should sink beneath the wave;
Her thunders shook the mighty deep,
And there should be her grave;
Nail to the mast her holy flag,
Set every thread-bare sail,
And give her to the god of storms, —
The lightning and the gale!

The Church in Harvard Square: The Reverend Mr. Holmes