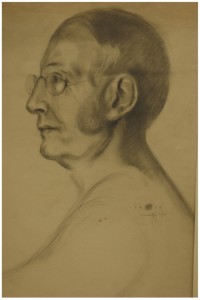 Charles W. Eliot as drawn by Kahlil Gibran in 1910

Harvard Square Library is pleased to present online a recent article about a meeting between Harvard University President Charles W. Eliot and the artist and poet Kahlil Gibran. Paul M. Wright’s article, “The President Meets the Prophet: Charles W. Eliot’s 1910 Encounter with Kahlil Gibran,” appeared in the Fall 2010 issue (Vol. 23, no. 3) of the Harvard Library Bulletin. The article incorporates several photographs of both Gibran and Wright, and focuses on Gibran’s offer to incorporate Eliot’s “likeness” into a series of drawings of the “big men who represent the art and knowledge of this day” (Wright, 84). The article is notable for its close focus on two important figures of the early twentieth century: the Harvard President who transformed the college into a prestigious university, and the poet from Lebanon whose writings continue to inspire religious liberals today.

Paul M. Wright was until recently an editor at the University of Massachusetts Press, where he created their series on “Studies in Print Culture and the History of the Book.” A 2009-10 Fellowship at the Houghton Library at Harvard University allowed him to research the Harvard Classics, during which he found the material that formed the genesis of this essay.

As Wright says, “One, of course, would wish to have been present at this meeting of two such disparate figures, so divided by age, education, ethnicity, class, and life experiences that it is hard to imagine that their paths would ever have converged. But thanks to Yankee patronage and progressive attitudes and Lebanese talent and persistence, they did come together, the result being an interesting, interpretative pencil portrait here published for the first time” (Wright, 89). I hope you find this article both enjoyable and illuminating about these two disparate characters. Harvard Square Library is grateful for the permission of Paul M. Wright, the Harvard Library Bulletin, and the Harvard University Archives, for permission to reprint the article and the images contained therein.