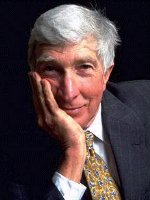 Born during the Depression in Reading, Pennsylvania, Updike grew up in the nearby tiny town of Shillington with his parents and grandparents. He wanted to become a writer, often reading daily two of the available mysteries and thrillers of the day. A scholarship to Harvard College led to his becoming editor of the Harvard Lampoon, “the world’s oldest humor magazine.” Updike’s model authors were James Thurber and Robert Benchley.

Upon graduating, Updike was for two years a New Yorker staff reporter. By the age of twenty-three, he began supporting himself and his family by his writing. Early in the twenty-first century he was the author of more than fifty books. His internationally popular series of Rabbit Run novels revealed shocking details of small town Protestant upwardly mobile middle-class white activities involving sex, faith, and death.

In celebration of John Updike as one of the Poets of Cambridge. . . USA, here is an excerpt from “Apologies to Harvard,” his 1973 Phi Beta Kappa poem:

APOLOGIES TO HARVARD
We took the world as given. Cigarettes
Were twenty-several cents a pack, and gas
as much per gallon. Sex came wrapped in rubber
And veiled in supernatural scruples—call
Them chivalry. A certain breathlessness
Was felt; perhaps the Bomb, which after all
Mushroomed us as we entered puberty,
Waking us from the newspaper-nightmare
Our childhoods had napped through, was realer then;
Our lives, at least, were not assumed to be
Our right; we lived, by shifts, on sufferance.
The world contained policemen, true; and these
Should be avoided; governments were bunk,
But well-intentioned; blacks were beautiful
But seldom seen; the poor were with ye always.
We thought one war as moral as the next,
Believed that life was tragic and absurd,
And were absurdly cheerful on that basis.
We loved John Donne and Hopkins, Yeats and Pound,
Medieval history was rather swank,
Psychology was in the mind; abstract
Things grabbed us where we lived; the only life
Worth living was the private life, and—last,
Worst scandal in this characterization—
We did not know we were a generation.

SLUM LORDS
The superrich make lousy neighbors—
they build a house and tear it down
and build another, twice as big, and leave.
They’re never there; they own so many
other houses, each demands a visit.
Entire neighborhoods called fashionable,
bustling with servants and masters, such as,
Louisburg Square in Boston or Bel Air in L.A.,
are districts now like Wall Street after dark
or Tombstone once the silver boom went bust.
The essence of the superrich is absence.
They like to demonstrate they can afford
to be elsewhere. Don’t let them in.
Their riches form a kind of poverty.