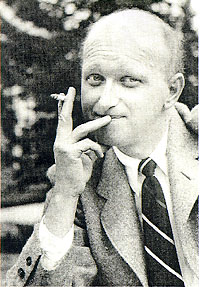 Brinnin is remembered not only as a poet but as an extensive correspondent with poets and an able anthologist of modern American-British poetry. Born in Halifax, Nova Scotia, his family moved to Detroit. His higher education at the University of Michigan and Harvard led to his teaching at Vassar College from 1942 to 1947 and as Princeton Professor of English at Boston University from 1961 to 1978. Among his other experience was his editing for Dodd-Mead in New York and his memorable directing of the YM-YWHA Association Poetry Center in New York City.

Brinnin not only wrote Dylan Thomas: An Intimate Journey in America, but brought Thomas himself to America and accompanied him in traveling across the country. He also authored The Third Rose: Gertrude Stein and Her World, William Carlos Williams, and an autobiography, Here. Now. Always. Among his publications of verse are: The Garden is Political, The Lincoln Lyrics, and The Selected Poems of John Malcolm Brinnin. John Malcolm Brinnin was awarded the Gold Medal for Distinguished Service to Poetry. When in the Greater Boston Area, he lived in Cambridge and Duxbury.

The Poetry of John Malcolm Brinnin

A NEW ENGLAND SAMPLER
Miss Dickinson is gone;
Mr. Thoreau has lain
In deeper Concord for
Some three-score years and more.
I had thought these were bones
would rise like tawny pines.

Cabot came down this way,
Took five redskins away
To show for sixpence in
Alleys Shakespearian.
I had thought these were bones
would rise like tawny pines.

Newport, when Henry James
Was there, smelled of the Thames;
His polished jaw and eye
Furthered the heresy.
I had thought these were bones
would rise like tawny pines.

When Jonathan Edwards went
To live in a Berkshire tent,
The Indians knew the result:
His tongue was difficult.
I had thought these were bones
would rise like tawny pines.

Scholarship and time
Have brought them bookish fame,
Whose biographies on stone
Are paged by the careless rain.
I had thought these were bones
would rise like tawny pines.

Consider not only John Malcolm Brinnin’s masterful American-British anthology, The Modern Poets, but also such lines as these:

This place is nowhere
but on the map…
What’s missing here? What do these people
feed on that won’t feed them.
This town needs scrolls, celestial delegations,
a swoon of virgins, apostles in apple green,
a landscape riding on a holy shoulder…

Praise God, this town keeps one
unheard-of masterpiece to justify
a million ordinary mornings
and pardon this one