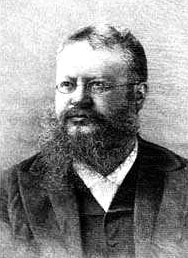 Although at eighteen years of age he declared himself an infidel in opposition to his family’s orthodox Congregationalism, John Fiske’s devotion to the scientific spirit later led to his affirmation of an evolutionary theism facilitated by Herbert Spencer’s philosophy.

Because of his near “atheism,” Fiske was not appointed to the Harvard faculty and served, therefore, only as an assistant librarian. In this position, Fiske found ample time for research and writing.

When he was able to do professional lecturing, he gradually grew both popular and wealthy (though he never learned to live within his means). His theme of American Manifest Destiny promised a millennium of peace and prosperity.