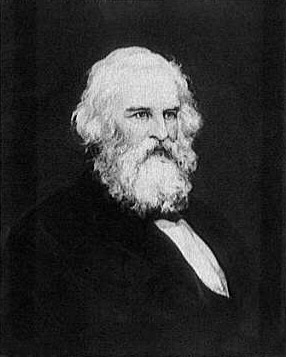 This long-beloved poet was a descendant of Pilgrims John and Priscilla Adams. He taught modern European languages at Bowdoin College and then at Harvard. While he and his young wife were visiting Europe, she died in Rotterdam. After he returned to Cambridge, he rented lodging at Craigie House, which had been General George Washington’s headquarters during the Revolutionary War. Later, Longfellow married Fanny Appleton. Six children were born to them in the Craigie House given to them by Fanny’s father, a wealthy Bostonian. Fanny died a tragic death when she burned to death after hot sealing wax ignited her dress. 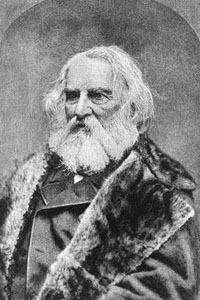 Henry Wadsworth Longfellow. Courtesy of the Library of Congress (LC-USZ62-103577).

Resigning his Harvard chair in 1854, Longfellow devoted his life to writing. His literary legacy includes The Song of Hiawatha and The Courtship of Miles Standish, Tales of a Wayside Inn, and Evangeline. He also translated Dante’s Divine Comedy into English.

This American poet was honored by Queen Victoria, Oxford University, Cambridge University, the Russian Academy of Sciences, and the Spanish Academy. His brother Samuel, a Unitarian minister, wrote the authorized biography of Henry Wadsworth Longfellow in two volumes. Many generations of schoolchildren loved to recite the poet’s tales.

The Text of “Paul Revere’s Ride”

Listen, my children and you shall hear
Of the midnight ride of Paul Revere,
On the eighteenth of April, in Seventy-five;
Hardly a man is now alive
Who remembers that famous day and year.

He said to his friend, “If the British march
By land or sea from the town tonight,
Hang a lantern aloft in the belfry arch
Of the North Church tower as a signal light-
One if by land, and two if by sea;
And I on the opposite shore will be,
Ready to ride and spread the alarm
Through every Middlesex village and farm,
For the country folk to be up and to arm.”

Then he said “Good-night!” and with muffled oar
Silently rowed to the Charlestown shore,
Just as the moon rose over the bay,
Where swinging wide at her moorings lay
The Somerset, British man-of-war;
A phantom ship, with each mast and spar
Across the moon like a prison bar,
And a huge black hulk, that was magnified
By its own reflection in the tide.

You know the rest. In the books you have read
How the British Regulars fired and fled-
How the farmers gave them ball for ball,
From behind each fence and farmyard wall,
Chasing the redcoats down the lane,
Then crossing the fields to emerge again
Under the trees at the turn of the road,
And only pausing to fire and load.
So through the night rode Paul Revere;
And so through the night went his cry of alarm
To every Middlesex village and farm-
A cry of defiance, and not of fear,
A voice in the darkness, a knock at the door,
And a word that shall echo forevermore!
For, borne on the night-wind of the Past,
Through all our history, to the last,
In the hour of darkness and peril and need,
The people will waken and listen to hear
The hurrying hoofbeats of that steed,
And the midnight message of Paul Revere.