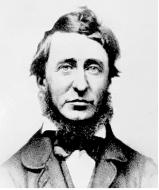 The “poet-naturalist” was born in Concord, Massachusetts, of French-Scottish-Quaker-Puritan heritage. When he was only twelve, Thoreau prepared nature collections for scientist Louis Agassiz. His older brother, John, paid the cost of his years at Harvard College, Class of 1887. The brothers then taught school together in Concord, but Henry resigned when he was forced to flog students. Among those who influenced him were the metaphysical poets, as well as Bronson Alcott and Jones Very.

Thoreau lived simply, earning income by surveying and making pencils. While living at Walden, he wrote a book about his trip with his brother: A Week on the Concord and Merrimac Rivers. When Henry was twenty-five, John cut himself while shaving and died of lockjaw while held in Henry’s arms.

When living in the Emerson home for two years, Thoreau helped as a handyman but was also a member of the historic Transcendental Club. While a tutor in the Staten Island home of William Emerson, he became acquainted with Horace Greeley, Lucretia Mott, and the elder Henry James. When he lived for two years in a hut that he built by Walden Pond, he not only raised beans and potatoes but wrote his most famous book, Walden. Thoreau was imprisoned when he refused to pay a poll tax used to support slavery and the war with Mexico. In his essay on Civil Disobedience cherished by Leo Tolstoy and Mahatma Gandhi, he declared: “That government is best which governs least.” In that spirit he helped American slaves escape to Canada.

This mystical natural and political philosopher and writer knew Nathaniel Hawthorne, Margaret Fuller, and Theodore Parker. Two books that tell of his trips are The Maine Woods (1864) and Cape Cod (1865). His Journal of the days of his life contained two million words and was published in twenty volumes. His address on “Slavery in Massachusetts” praised the militant abolitionist John Brown. When Thoreau visited Walt Whitman in New York City in 1850, he was given a signed copy of Leaves of Grass.

Thoreau’s own poems were seldom highly honored except for an early appraisal by Emerson, but in 1983, Carl Bode gathered a volume of the entire Collected Poems.

This poet, a lover of life who was a true original, died of tuberculosis at the age of forty-five. His intimate friend, William Ellery Channing II, the nephew of the noted Unitarian minister, wrote the first biography: Thoreau, the Poet Naturalist.

The Poetry of Henry David Thoreau

And next in value, which thy kindness lends,
That I may greatly disappoint my friends,
Howe’er they think or hope that it may be,
They may not dream how thou’st distinguished me.

That my weak hand may equal my firm faith,
And my life practice more than my tongue saith;
That my low conduct may not show,
Nor my relenting lines,
That I thy purpose did not know,
Or overrated thy designs.

NATURE
O nature I do not aspire
To be the highest in thy quire,
To be a meteor in the sky
Or comet that may range on high,
Only a zephyr that may blow
Among the reeds by the river low.
Give me thy most privy place
Where to run my airy race.
In some withdrawn unpublic mead
Let me sigh upon a reed,
Or in the woods with leafy din
Whisper the still evening in,
For I had rather be thy child
And pupil in the forest wild
Than be the king of men elsewhere
And most sovereign slave of care
To have one moment of thy dawn
Than share the city’s year forlorn.
Some still work give me to do
Only be it near to you.

OUR COUNTRY
It is a noble country where we dwell,
Fit for a stalwart race to summer in;
From Madawaska to Red River raft,
From Florid keys to the Missouri forks,
See what unwearied copious streams
Come tumbling to the east and southern shore,
To find a man stand on their lowland banks:
Behold the innumerous rivers and the licks
Where he may drink to quench his summer’s thirst,
And the broad corn and rice fields yonder, where
His hands may gather for his winter’s store.

See the fair reaches of the northern lakes
To cool his summer with their inland breeze,
And the long slumbering Appalachian range
Offering its slopes to his unwearied knees!
See what a long-lipped sea cloth clip the shores,
And noble strands where navies may find port;
See Boston, Baltimore, and New York stand
Fair in the sunshine on the eastern sea,
And yonder too the fair green prairie.

See the red race with sullen step retreat,
Emptying its graves, striking the wigwam tent,
And where the rude camps of its brethren stand,
Dotting the distant green, their herds around;
In serried ranks, and with a distant clang,
Their fowl fly o’er, bound to the northern lakes,
Whose plashing waves invite their webbed feet

Such the fair reach and prospect of the land,
The journeying summer creeps from south to north
With wearied feet, resting in many a vale;
Its length cloth tire the seasons to o’ercome,
Its widening breadth doth make the sea-breeze pause
And spend its breath against the mountain’s side:
Still serene Summer paints the southern fields,
While the stern Winter reigns on northern hills.

Look nearer,—know the lineaments of each face,—
Learn the far-travelled race, and find here met
The so long gathering congress of the world!
The Afric race brought here to curse its fate,
Erin to bless,—the patient German too,
Th’ industrious Swiss, the fickle, sanguine Gaul,
And manly Saxon, leading all the rest.
All things invite this earth’s inhabitants
To rear their lives to an unheard-of height,
And meet the expectation of the land;
To give at length the restless race of man
A pause in the long weltering caravan.