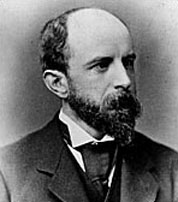 Henry Adams, a son of Charles Francis Adams and Abigail Brooks, was born in the family home on Mount Vernon Street, just below the State House. High expectations were held of this descendant of President John Adams and President John Quincy Adams.

After graduating from Harvard College in 1858, he went to Berlin to study civil law. When he found that he was learning little, he moved to Dresden and traveled in Austria and Italy as well as Germany.

In 1860, when his father was in Washington serving as a congressman from Massachusetts, he accepted the invitation to be private secretary to his father, and he continued in that role when his father was appointed United States Minister to Great Britain. This was the son’s distinctive introduction to the art of diplomacy.

In returning to Washington in 1868, Adams became a political journalist writing articles for The North American Review and The Nation. He soon became both the editor of The North American Review and—for seven years—an assistant professor of history at Harvard University. He hesitated about accepting this invitation until Harvard President Charles Eliot asked him if he could name anyone better qualified.

Adams wrote a nine-volume History of the United States from 1801 to 1817 describing the administrations of Thomas Jefferson and James Madison.

In 1885 Adams’s wife—suffering disabling depression after the death of her father—committed suicide by potassium cyanide. He never recovered from this loss but was helped by John LaFarge, the master of watercolor painting, with whom he traveled in the Pacific.

Adams lived in a house in Washington, D.C. built on Lafayette Square—directly opposite the White House. It was designed by a Harvard classmate, Henry Hobson Richardson. Next door was the house of his close friend John Hay, Theodore Roosevelt’s secretary of state. Adams and Hay frequently took daily walks together. Among his other friends were Justice Oliver Wendell Holmes, Jr., and novelist Henry James.

The latter years of Adams included many publications, three volumes of which are included in The Library of America series begun in 1995. His interpretation of Western history asserts that the pinnacle period was 1066, around the time of the creation of the continental cathedrals. Following the high Middle Ages Adams sees a decline in religion and art that he claimed hit bottom in Boston in the nineteenth century in comparison with the golden age of Chartres and the twelfth century faith that the universe is a well ordered divine order, unlike the chaos he saw in contemporary science. At the Paris Exposition of 1900 Adams beheld whirring dynamos that contrasted vividly with the Virgin of faith which Adams affirmed in his book Mont-Saint-Michel, published with an introduction by architect Ralph Adams Cram.

Henry Adams died of a stroke in 1918. In his wallet was found a “Prayer to the Virgin of Chartres.” He was buried at the gravesite of his wife Marian in Rock Creek Cemetery in Washington, over which now stands a brooding statue designed by Augustus St. Gaudens.

A Selection from the Writings of Henry Adams

PRAYER TO THE DYNAMO
Mysterious Power! Gentle Friend!
Despotic Master! Tireless Force!
You and We are near the End.
Either You or We must bend
To bear the martyrs’ Cross.

We know ourselves, what we can bear
As men; our strength and weakness too;
Down to the fraction of a hair;
And know that we, with all our care
And knowledge, know not you.

You come in silence, Primal Force,
We know not whence, or when, or why;
You stay a moment in your course
To play; and, lo! you leap across
To Alpha Centauri!

We know not whether you are kind,
Or cruel in your fiercer mood;
But be you Matter, be you Mind,
We think we know that you are blind,
And we alone are good.

We know that prayer is thrown away,
For you are only force and light;
A shifting current; night and day;
We know this well, and yet we pray,
For prayer is infinite,

Like you! Within the finite sphere
That bounds the impotence of thought,
We search an outlet everywhere
But only find that we are here
And that you are—are not!

What are we then? the lords of space?
The master-mind whose tasks you do?
Jockey who rides you in the race?
Or are we atoms whirled apace,
Shaped and controlled by you?

Still silence! Still no end in sight!
No sound in answer to our cry!
Then, by the God we now hold tight,
Though we destroy soul, life and light,
Answer you shall—or die!

We are no beggars! What care we
For hopes or terrors, love or hate?
What for the universe? We see
Only our certain destiny
And the last word of Fate.

Seize, then, the Atom! rack his joints!
Tear out of him his secret spring!
Grind him to nothing!—though he points
To us, and his life-blood anoints
Me—the dead Atom-King!