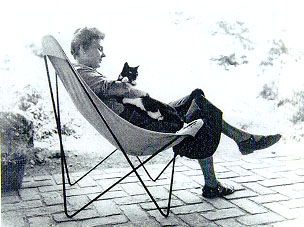 A poet of observation, not of personal relationships, Bishop writes of the “Sandpiper,” a bird seen running on the beach while it intently watches grains of sand. Bishop paints minutia of nature visible on land and sea. Her power to see was not the fruit of a life without pain. Her father died but mere months after her own birth-in Worcester, Massachusetts, in 1921. Her mother was confined to a mental hospital when Elizabeth was only five, and she never saw her again.

After living with her father’s parents, Bishop met Marianne Moore, who encouraged publication of her early poems written when she studied at Vassar College. Later, when living in New York, she became a close friend of Robert Lowell. Then Bishop was a consultant in poetry at the Library of Congress. When she lived in Florida for seven years, Bishop completed her first book of poems, North and South-A Spring (1955). It won the Pulitzer Prize.

Following her life-steadying lesbian love relation with Lota de Macedo Soares throughout their years together in Brazil, Bishop returned to America after Lota’s suicide. She became poet-in-residence at Harvard in 1969. Her Complete Poems won the National Book Award in 1970.

A new source of strength for the rest of Bishop’s life was her new partner, Alice Methfessel. Elizabeth Bishop taught at Harvard until death in her Boston apartment of a cerebral aneurism in 1979.

The Poetry of Elizabeth Bishop

THE FISH
I caught a tremendous fish
and held him beside the boat
half out of water, with my hook
fast in a corner of his mouth.
He didn’t fight.
He hadn’t fought at all.
He hung a grunting weight,
battered and venerable
and homely. Here and there
his brown skin hung like strips
like ancient wall-paper,
and its pattern of darker brown
was like wall-paper:
shapes like full-blown roses
stained and lost through age.
He was speckled with barnacles,
fine rosettes of lime,
and infested
with tiny white sea-lice,
and underneath two or three
rags of green weed hung down.
While his gills were breathing in
the terrible oxygen
-the frightening gills,
fresh and crisp with blood,
that can cut so badly –
I thought of the coarse white flesh
packed in like feathers,
the big bones and the little bones,
the dramatic reds and blacks
of his shiny entrails,
and the pink swim-bladder
like a big peony.
I looked into his eyes
which were far larger than mine
but shallower, and yellowed,
the irises backed and packed
with tarnished tinfoil
seen through the lenses
of old scratched isinglass.
They shifted a little, but not
to return my stare.
-It was more like the tipping
of an object toward the light.
I admired his sullen face,
the mechanism of his jaw,
and then I saw
that from his lower lip
-if you could call it a lip-
grim, wet and weapon-like,
hung five old pieces of fish-line,
or four and a wire leader
with the swivel still attached,
with all their five big hooks
grown firmly in his mouth.
A green line, frayed at the end
where he broke it, two heavier lines,
and a fine black thread
still crimped from the strain and snap
when it broke and he got away.
Like medals with their ribbons
frayed and wavering,
a five-haired beard of wisdom
trailing from his aching jaw.
I stared and stared
and victory filled up
the little rented boat,
from the pool of bilge
where oil had spread a rainbow
around the rusted engine
to the bailer rusted orange,
the sun-cracked thwarts,
the oarlocks on their strings,
the gunnels – until everything
was rainbow, rainbow, rainbow!
And I let the fish go.