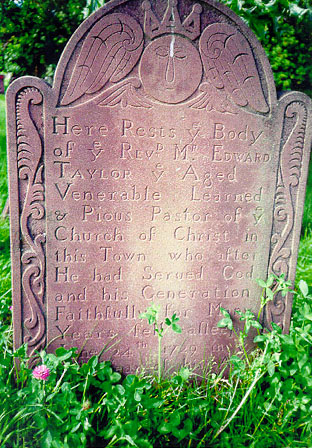 Born in the son of a farmer in England around 1642, the poet crossed the Atlantic in 1668 and was admitted with advanced standing to Harvard College, graduating in 1671. Taylor roomed with Samuel Sewall, the judge who later presided at the Salem witch trials. While in Cambridge, Taylor wrote two elegies and delivered a verse declamation upon graduation.

Taylor was urged by Increase Mather to accept an invitation to minister on the frontier in the wilderness town of Westfield, Massachusetts. The night before he was to set on the desperate winter journey by foot, he went to take his leave of President Charles Chauncy. Edward Taylor’s diary reports: “His love was so much expressed that I could scarce leave him, and well it may be so for he told me in plain words that he knew not how to part with me.” After acute indecision, Edward Taylor left with Thomas Dewey, the Westfield church’s representative, for the frontier. They departed on November 27, 1671, after snowfall, as described in Taylor’s diary: “The snow being above mid-leg deep, the way unbeaten, or the track filled up again, and over rocks and mountains about 100 miles.” Before the year was out, President Charles Chauncy died.

However, Edward Taylor served in the wilderness until his death 58 years later—as minister, doctor, farmer, strategist to prevent Indian attacks, and poet. Taylor’s parishioners were called to worship with the beat of a drum. His wife, Elizabeth Fitch, bore eight children, five of whom died in infancy. He and his second wife, Ruth Wyllys, had six children.

The minister continued to write meditations of devotion most often related to the sacred sacrament of communion. It has been noted that he may well have been “the most prolific poet of America’s first two hundred years.”

Nevertheless, Edward Taylor forbade his family to publish the works which he had composed and preserved. His self-bound two volumes remained on deposit in the Yale Library for more than two centuries. When Professor Thomas H. Johnson examined them, he edited for publication The Poetical Works of Edward Taylor. What a stir! It was said: “Taylor’s poems established him almost at once and without quibble as not only America’s finest Colonial poet but as one of the most striking writers in the whole range of American literature.”

The Poetry of Edward Taylor

HUSWIFERY
Make me, O Lord, thy Spining Wheele compleate.
Thy Holy Worde my Distaff make for meet
Make mine Affections thy Swift Flyers neate
And make my Soule thy holy Spoole to bee.
My Conversation make to be thy Reele
And reele the yarn thereon spun of thy Wheele.

Make me thy Loome then, knit therein this Twine:
And make thy Holy Spirit, Lord, wince quills:
Then weave the Web thyselfe. The yarn is fine.
Thine Ordinances make my Fulling Mills.
Then dy the same in Hcavenly Colours Choice,
All pinks with Varnisht Flowers of Paradise.

Then cloath therewith mine Understanding, Will,
Affections, Judgment, Conscience, Memory
My Words, and Actions, that their shine may fill
My wayes with glory and thee glorify.
Then mine apparel! shall display before yee
That I am Cloathd in Holy robes for glory.

UPON A SPIDER CATCHING A FLY
Thou sorrow, venom Elfe.
Is this thy play,
To spin a web out of thyselfe
To catch a Fly?
For Why

I saw a pettish wasp
Fall foule therein.
Whom yet thy Whorle pins did not clasp
Lest he should fling
His sting.

But as affraid, remote
Didst stand hereat
And with thy little fingers stroke
And gently tap
His back .

Thus gently him didst treate
Lest he should pet,
And in a froppish, waspish heate
Should greatly fret

Whereas the silly Fly,
Caught by its leg
Thou by the throate tookst hastily
And ‘hinde the head
Bite Dead.

This goes to pot, that not
Nature cloth call.
Strive not above what strength hath got
Lest in the brawle
Thou fall.

This Frey seems thus to us.
Hells Spider gets
His intrails spun to whip Cords thus
And wove to nets
And sets.

To tangle Adams race
In’s stratigems
To their Destructions, spoil’d, made base
By venom things
Damn’d Sins.

But mighty, Gracious Lord
Communicate
Thy Grace to breake the Cord, afford
Us Glorys Gate
And State.

We’l Nightingaile sing like
When pearcht on high
In Glories Cage, thy glory, bright,
And thankfully,
For joy.