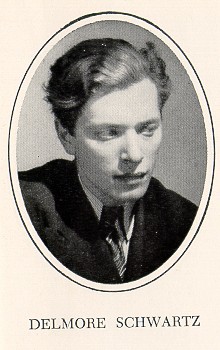 Delmore Schwartz, born in Brooklyn, was the son of Jewish immigrants from Romania. He learned to read when he was three. When he was nine, his real estate operator father left his wife and children and moved to Chicago.

After studying with Sidney Hook, admirer of Karl Marx and John Dewey, he earned a New York University B.A. in philosophy and then did graduate work in philosophy at Harvard from 1935 to 1937, especially appreciating Professor Alfred North Whitehead. The publication of his famous short story in his book, In Dreams Begin Responsibilities, was lauded by T. S. Eliot, William Carlos Williams, and Robert Lowell. In 1940 he became poetry editor for the eminent left-wing Partisan Review. From 1940 to 1947 he taught writing at Harvard, after which he received the Bollinger Prize for Poetry in 1959 for his Selected Poems: Summer Knowledge. He then was a visiting professor at Syracuse University from 1962 to 1965.

The literary ascent of Delmore Schwartz was followed by the rapid descent of his life. His six-year marriage to Gertrude Buckman was followed by his 1949-1957 life with Elizabeth Pollett, who lived with him in a farmhouse in New Jersey for five years and exclaimed, “Being with him was like living on the side of a volcano.” His fear of failure seemed to correlate with manic-depressive periods and growing paranoia. Following heavy dependence on alcohol, barbiturates and amphetamines, Schwartz was fifty-two when he died of a heart attack in the lobby of a Manhattan hotel. His identity in the morgue was not known for two days, but The New York Times wrote a lengthy appreciation. His life was celebrated at his funeral by Robert Lowell and Dwight Macdonald.

The Poetry of Delmore Schwartz

Below are two of his poems reflecting his Cambridge experience.

CAMBRIDGE, SPRING 1937
At last the air fragrant, the bird’s bubbling whistle
Succinct in the unknown unsettled trees:
O little Charles, beside the Georgian colleges
And milltown New England; at last the wind soft,
The sky unmoving, and the dead look
Of factory windows separate, at last,
From windows gray and wet:
for now the sunlight
Thrashes its wet shellac on brickwalk and gutter,
White splinters streak midmorning and doorstep,
Winter passes as the lighted streetcar
Moves at midnight, one scene of the past,
Droll and unreal, stiff, stilted and hooded.

THE TRUE BLUE AMERICAN
Jeremiah Dickson was a true-blue American,
For he was a little boy who understood America, for he felt that he must
Think about everything; because that’s all there is to think about,
Knowing immediately the intimacy of truth and comedy,
Knowing intuitively how a sense of humor was a necessity
For one and for all who live in America. Thus, natively, and
Naturally when on an April Sunday in an ice cream parlor Jeremiah
Was requested to choose between a chocolate sundae and a banana split
He answered unhesitatingly, having no need to think of it
Being a true-blue American, determined to continue as he began:
Rejected the either-or of Kierkegaard, and many another European;
Refusing to accept alternatives, refusing to believe the choice of between;
Rejecting selection; denying dilemma; electing absolute affirmation: knowing
in his breast
The infinite and the gold
Of the endless frontier, the deathless West.
“Both: I will have them both!” declared this true-blue American
In Cambridge, Massachusetts, on an April Sunday, instructed
By the great department stores, by the Five-and-Ten,
Taught by Christmas, by the circus, by the vulgarity and grandeur of
Niagara Falls and the Grand Canyon,
Tutored by the grandeur, vulgarity, and infinite appetite gratified and
Shining in the darkness, of the moonlight
On Saturdays at the double bills of the pictures,
The consummation of the advertisements of the imagination of the light
Which is as it was—the infinite belief in infinite hope—of Columbus,
Barnum, Edison, and Jeremiah Dickson.