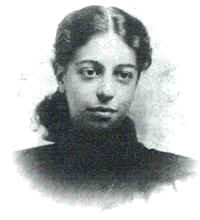 Angelina Weld Grimke was born in Boston, Massachusetts on February 27, 1880 to Sarah Stanley Grimke and Archibald Grimke. Born into a biracial family well known for their commitment to abolitionism, Angelina went on to become a distinguished poet and a black liberationist in her own right.

In 1883, when Angelina was only three years old, her mother left her father and took young Angelina with her. Four years later in 1887, Angelina returned to live with her father, never to see her mother again. Growing up with her father, she attended some of the top schools in Massachusetts, including the Cushing and Carleton academies.

Following her graduation from high school, Grimke attended the Boston Normal School of Gymnastics, graduating in 1902 with her degree in physical education. She went on to teach English in Washington, DC at the Armstrong Manual Training School and the M Street High School (later renamed Dunbar High School). During her years of teaching, Angelina continued to pursue education through summer courses at Harvard University. Also influential for Grimke, at M Street High School, several of her colleagues were Harlem Renaissance writers.

It was in the early 1900s that Grimke began writing poetry about anti-racism and black lived experience. Her poetry, known especially for its colorful imagery, encompasses topics such as black life and pride, racial injustice, and nature. Grimke published primarily in black journals, and her work is included in anthologies such as Negro Poets and Their Poems (1923), The Poetry of the Negro (1949, edited by Langston Hughes), and Caroling Dusk (1927, edited by Countee Cullen). Known as a foremother of the Harlem Renaissance, her earliest publications predated the movement itself by roughly thirty years, preparing the way for its emergence. 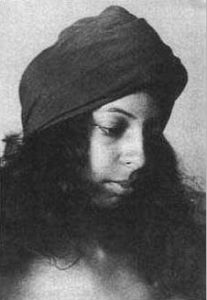 In addition to her poetry, Grimke also wrote short stories, essays, and plays. Most notably, her play Rachel was the first play written by an African American and performed by African American actors. Rachel was a response to W.E.B. Dubois’s call for black theater, and Grimke conceived of it as a tool for the political activism of the NAACP.

In 1926, Grimke retired from teaching at M Street High School to take care of her aging father. She cared for him until his death in 1930. Following her father’s death, Angelina moved to New York. There she lived in seclusion, overwhelmed with the seemingly impenetrable barriers to racial, gender, and sexual justice and equality. She never again published.

Grimke died in New York on June 10, 1958. Following her death, her work published posthumously revealed an additional layer of her identity: her lesbian sexual orientation. While her writings published in her lifetime alluded to lesbian eroticism, those published following her death confirmed her lesbian identity. As a black lesbian woman in the early twentieth century, Grimke’s successful publications and many contributions to social movements are truly remarkable.

While Angelina Weld Grimke was not herself a Unitarian, her family had connections to Unitarianism. Her uncle, Francis Grimke, was a Unitarian minister, and her great aunt (also her namesake), white abolitionist Angelina Grimke Weld, attended Unitarian congregations late in her life.

The Poetry of Angelina Weld Grimke

GRASS FINGERS
Touch me, touch me,
Little cool grass fingers,
Elusive, delicate grass fingers.
With your shy brushings,
Touch my face &
My naked arms &
My thighs &
My feet.
Is there nothing that is kind?
You need not fear me.
Soon I shall be too far beneath you,
For you to reach me, even,
With your tiny timorous toes.

TENEBRIS
There is a tree, by day,
That, at night,
Has a shadow,
A hand huge and black
With fingers long and black.
All through the dark,
Against the white man’s house,
In the little wind,
the black hand plucks and plucks
At the bricks.
The bricks are the color of blood and very small.
Is it a black hand,
Or is it a shadow?