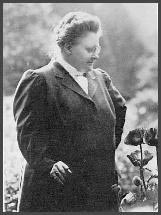 The daughter of a “Boston Brahmin” family, Amy Lowell had two brothers: Lawrence, President of Harvard University, and Percival, the astronomer who observed Mars and also established the Lowell Observatory in Arizona. After early education at home, Amy Lowell was an unruly young student at school. She taught herself much by reading books in her father’s 7,000-volume library and at the Boston Athenaeum’s collection.

She was five feet tall and 240 pounds. Her suitor broke off their engagement suddenly. Nervous prostration was followed by a slow convalescence. After a crisis, she found her vocation: She decided to become a poet. Moreover, she strengthened other poets, such as Robert Frost, in creating a new form of literature described as American Renaissance.

Lowell’s contribution to life was stabilized by her “Boston Marriage” to actress Ada Dwyer Russell, a commitment which lasted until the poet’s death at 51.

Lowell was an outspoken presence in both the United States and Europe. Her personal literary production was fourteen books in thirteen years, including her volumes of poetry plus a major biography of her most admired poet, John Keats. Other works are Six French Poets, Tendencies in American Poetry, and essays published posthumously titled Poets and Poetry.

The Poetry of Amy Lowell

PURPLE GRACKLES
The grackles have come.
The smoothness of the morning is puckered with their incessant chatter.
A sociable lot, these purple grackles,
Thousands of them, strung across a long run of wind,
Thousands of them beating the air-ways with quick wing-jerks,
Spinning down the currents of the South.
Every year they come,
My garden is a place of solace and recreation evidently,
For they always pass a day with me.
With high good nature they tell me what I do not want to hear.
The grackles have come.

I am persuaded that grackles are birds;
But when they are settled in the trees,
I am inclined to declare them fruits
And the trees turned hybrid blackberry vines.
Blackness shining and bulging under leaves,
Does not that mean blackberries, I ask you?
Nonsense! The grackles have come.
Nonchalant highwaymen, pickpockets, second story burglars,
Stealing away my little hope of Summer.

They drop out of the trees
And strut in companies over the lawn,
Tired of flying, no doubt;
A grand parade to limber legs and give wings a rest.
I should built a great fish-pond for them,
Since it is evident hat a bird-bath, meant to accommodate two goldfinches at most.
It is slight hospitality for these hordes.
Scarcely one can get in,
They all peck and scrabble so,
Crowding, pushing, chasing one another up the bank with spread wings.
“Are we ducks, you, owner of such inadequate comforts,
That you offer us lily-tanks where one must swim or drown,
Not stand and splash like a gentleman?”

They rate me of no consequence,
But they might reflect that it is my gutter.
I know their opinion of me,
Because one is drying himself on the window-sill
Not two feet from my hand.
His purple neck is sleek with water,
And the fellow preens his feathers for all the world as if I were a fountain statue.
If it were not for the window,
I am convinced he would light on my head.
Tyrian-feathered freebooter,
Appropriating my delightful gutter with so extravagant an ease,
You are as cool a pirate as ever scuttled a ship,
And are you not scuttling my Summer with every peck of your sharp bill?

I grant their coming, but I would not have them go.
It is a milestone, this passing of grackles.
A day of them and it is a year gone by.
There is magic in this and terror,
But I only stare stupidly out of the window.
The grackles have come.
Come! Yes, they surely came.
But they have gone.
A moment ago the oak was full of them,
They are not there now.
Not a speck of a black wing,
Not an eye-peep of a purple head.
The grackles have gone,
And I watch an Autumn storm
Stripping the garden,
Shouting black rain challenges
To an old, limp Summer
Laid down to die in the flower-beds.

TRADES
I want to be a carpenter,
To work all day long in clean wood,
Shaving it into little thin slivers
Which screw up into curls behind my plane;
Pounding square, black nails into white boards,
With the claws of my hammer glistening
Like the tongue of a snake.
I want to shingle a house,
Sitting on the ridge-pole in a bright breeze.
I want to put the shingles on neatly,
Taking great care that each is directly between two others.
I want my hands to have the tang of wood:
Spruce, Cedar, Cypress.
I want to draw a line on a board with a flat pencil,
And then saw along that line,
With the sweet-smelling sawdust piling up in a yellow heap at my feet.

That is the life!
Heigh-ho!
It is much easier than to write this poem.

MEETING-HOUSE HILL
I must be mad, or very tired,
When the curve of a blue bay beyond a railroad track
Is shrill and sweet to me like the sudden springing of a tune,
And the sight of a white church above thin trees in a city square
Amazes my eyes as though it were the Parthenon.
Clear, reticent, superbly final,
With the pillars of its portico refined to a cautious elegance,
It dominates the weak trees,
And the shot of its spire
Is cool and candid,
Rising into an unresisting sky.
Strange meeting-house
Pausing a moment upon a squalid hill-top.
I watch the spire sweeping the sky,
I am dizzy with the movement of the sky;
I might be watching a mast
With its royals set full
Straining before a two-reef breeze.
I might be sighting a tea-clipper,
Tacking into the blue bay,
Just back from Canton
With her hold full of green and blue porcelain
And a Chinese coolie leaning over the rail
Gazing at the white spire
With dull, sea-spent eyes.

My dress is richly figured,
And the train
Makes a pink and silver stain
On the gravel, and the thrift
Of the borders.
Just a plate of current fashion,
Tripping by in high-heeled, ribboned shoes.
Not a softness anywhere about me,
Only whale-bone and brocade.
And I sink on a seat in the shade
Of a lime-tree. For my passion
Wars against the stiff brocade.
The daffodils and squills
Flutter in the breeze
As they please.
And I weep;
For the lime-tree is in blossom
And one small flower has dropped upon my bosom.

And the plashing of waterdrops
In the marble fountain
Comes down the garden-paths.
The dripping never stops.
Underneath my stiffened gown
Is the softness of a woman bathing in a marble basin,
A basin in the midst of hedges grown
So thick, she cannot see her lover hiding.
But she guesses he is near,
And the sliding of the water
Seems the stroking of a dear
Hand upon her.
What is Summer in a fine brocaded gown!
I should like to see it lying in a heap upon the ground.
All the pink and silver crumpled upon the ground.

I would be the pink and silver as I ran along the paths,
And he would stumble after,
Bewildered by my laughter.
I should see the sun flashing from his sword-hilt and the buckles on his shoes.
I would choose
To lead him in a maze along the patterned paths,
A bright and laughing maze for my heavy-booted lover,
Till he caught me in the shade,
And the buttons of his waistcoat bruised my body as he clasped me,
Aching, melting, unafraid.
With the shadows of the leaves and the sundrops,
And the plopping of the waterdrops,
All about us in the open afternoon –
I am very like to swoon
With the weight of this brocade,
For the sun sifts through the shade.

Underneath the fallen blossom
In my bosom,
Is a letter I have hid.
It was brought to me this morning by a rider from the Duke.
“Madam, we regret to inform you that Lord Hartwell
Died in action Thursday se’nnight.”
As I read it in the white, morning sunlight,
The letters squirmed like snakes.
“Any answer, Madam?” said my footman.
“No,” I told him.
“See that the messenger takes some refreshment.
No, no answer.”
And I walked into the garden,
Up and down the patterned paths,
In my stiff, correct brocade.
The blue and yellow flowers stood up proudly in the sun,
Each one.
I stood upright too,
Held rigid to the pattern
By the stiffness of my gown.
Up and down I walked,
Up and down.

In a month he would have been my husband.
In a month, here, underneath this lime,
We would have broke the pattern;
He for me, and I for him,
He as Colonel, I as Lady,
On this shady seat.
He had a whim
That sunlight carried blessing.
And I answered, “It shall be as you have said.”
Now he is dead.

In Summer and in Winter I shall walk
Up and down
The patterned garden-paths
In my stiff, brocaded gown.
The squills and daffodils
Will give place to pillared roses, and to asters, and to snow.
I shall go
Up and down,
In my gown.
Gorgeously arrayed,
Boned and stayed.
And the softness of my body will be guarded from embrace
By each button, hook, and lace.
For the man who should loose me is dead,
Fighting with the Duke in Flanders,
In a pattern called a war.
Christ! What are patterns for?

The Biography of Abbot Lawrence Lowell

The Biography of Percival Lowell