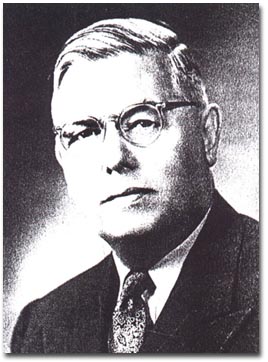 Until modern times mental illness had long been associated with ideas of immorality and inferiority. Analogies to demon possession were common; indeed, some invoked the biblical account—Jesus casting demons out of the madman at Gadarene—to allude to the spiritual aspect of such maladies. Recently, however, the work of psychiatrists in particular has aided in removing the veil around these previously mystifying diseases. Much of this work was done in the twentieth century, and no one did more to dispel erroneous myths about psychiatric disorders than Winfred Overholser.

In 1917 Overholser began the type of work that would occupy most of his life when he accepted a position at the Westboro State Hospital in Massachusetts. The advent of the First World War created a need for the study of psychiatric ailments affecting soldiers, and he received military leave to go to France to work in the neuropsychiatric section of the U.S. Army Medical Corps. The work in France qualified him to become the assistant superintendent of Gardner State Hospital in Massachusetts in the early 1920s.

Overholser then became an assistant to the commissioner of the Massachusetts Department of Mental Diseases. This affiliation allowed him to help enact the Briggs Law which provided for the mental evaluation of any person convicted of a serious crime. Of this piece of legislation, he wrote, “The significance of the Briggs Law is that it has provided for the prompt recognition of defendants who should be in hospitals, thus preventing trial of mentally ill persons.”

In addition to working for the rights of mentally ill criminals, Dr. Overholser taught at Boston University, specifically at the medical school from 1925-1934, and at the law school from 1929-1937. He also taught psychiatry at George Washington School of Medicine in Washington D.C., becoming a professor in 1938.

In 1937 Overholser received the appointment that defined his life of medical service. He was nominated by the American Psychiatric Association to be the superintendent of St. Elizabeth’s Hospital, a government run institution in Washington, D.C. He held that post until 1962.

Once in Washington, Overholser continued in his tradition of caring for the mentally ill and treating patients with compassion, realizing that a mental illness should not be ideologically differentiated from a physical ailment. He was an active Unitarian who was a trustee of All Souls Church in Washington, D.C. Religion played a major part in his life, and he often examined the relationship between religion and mental disorders. On this topic, he wrote, “Religious conflicts are not, of course, necessarily related to mental disorder; they are, in fact, a part of everyday life. There are certain conflicts, however, that are the outgrowth of mental disorder and a manifestation of it.” He was an active member of the Unitarian Service Committee, and he served as the moderator of the American Unitarian Association from 1946-1948. Overholser achieved some renown as a proponent of liberal religion.

Much of Overholser’s work at St. Elizabeth’s consisted of helping mentally ill criminals to be absolved of responsibility for their crimes. He was a supporter of the Durham Rule, which would cause such consideration to become law. During the period that Overholser was at St. Elizabeth’s, the hospital grew to be an internationally acclaimed institution of mental health. His leadership was widely seen as the cause since he exhibited an unusual ability to integrate esoteric concepts and common reasoning. He came to be known as “the dean of forensic psychiatry.”

From 1945 to 1958, St. Elizabeth’s was charged with the care of a high profile patient, Ezra Pound. The poet had been accused of treason after the Second World War because of radio broadcasts he had made from Italy. According to Overholser, he suffered from a paranoid state which rendered him unfit. Overholser’s evaluation helped Pound eventually to achieve independence. Another famous case in 1954 involved former Marine Col. Frank Schwable, who had signed a germ warfare confession under coercion from his Chinese captors. Overholser’s insistence that Schwable was without “a will” led to the Army’s adaption of a Code of Conduct for its personnel.

Dr. Overholser served as the president of the American Psychiatric Association (1947-1948). The organizations with which he was affiliated included the New England Society of Psychiatry, the Pan American Medical Society of Washington, and the Academy of Medicine in Washington. He a gave a simple prescription for mental health: “Don’t take yourself too seriously. Be tolerant of the peculiarities of others. Try to do something worthwhile in your life and observe the Golden Rule.”

Winfred Overholser died in Washington, D.C. on October 6, 1964. He left behind his wife, Dorothy Stebbins, whom he married in 1919, and three children: Dorothy, Jane, and Winfred, Jr. His work includes two books, The Handbook of Psychiatry (1947), and Psychiatry and the Law (1953).

Organizations from which he received honors included the Department of Health, Education and Welfare, George Washington University (D.Sc.), St. Bonaventure University (Doctor of Humane Letters), and the French Legion of Honor.

A Psychiatrist Speaks [To the Clergy]
By Winfred Overholser

What rudimentary care was first provided for the victims of mental disease was supplied by the religious orders, not by physicians; it is probably historically accurate to say that disease of the mind was not reclaimed by medicine as a subject for its attention until the time of the French Revolution, under that hardy pioneer, Philippe Pinel, the physician who first struck the shackles off the unfortunate wretches housed in the Bicêtre at Paris. It was Pinel who started the stream of humane care of the mentally ill, care given under medical auspices. Shortly before his time, in 1773, the first public mental hospital in the United States was founded at Williamsburg, Virginia, but the development of public care was feeble and halting until the magnificent work of Dorothea Lynde Dix.

The work of this remarkable woman is one in which every American, and especially every Unitarian, may well take pride. She is, to my mind, the greatest American woman of the nineteenth century; she should long ere now have been honored by election to the Hall of Fame, but despite her lack of public recognition her memory is ever green in the hearts of those who are interested in the welfare of the mentally ill. Her native devotion to the downtrodden was much developed by several years spent as a member of the household of William Ellery Channing; in 1841, although frail in body and no longer young, she started a campaign for the development and establishment of mental hospitals throughout this country, Canada and England. During the ensuing forty years she brought about the establishment or enlargement of at least thirty-two hospitals, an achievement unparalleled in the history of humanitarian effect.

— From a commencement Address at the Meadville Theological School, published in the Christian Register, September 1944.

Why I Believe in Advancing Unitarianism
by Winfred Overholser

If there ever was a time that cried aloud for freedom of the spirit and the mind, recognition of the rights of man, a practical putting into effect of the basic principles of the Golden Rule—in short, a true religious liberalism—that time is now.

We have won a long and costly war that was forced upon us by totalitarian despots. It is not enough, however, to sit back and assume that automatically the forces of democracy will now reassert themselves and that all will be well. There never was anything automatic about the rise or maintenance of freedom; it must always be fought for vigilantly and vigorously. Hitler and Mussolini are fortunately dead, but the evil forces of autocracy, the negation of the rights of the individual, greed and oppression still live.

What has this to do with Unitarianism? Just this: Beyond all creedal churches, it emphasizes the fundamental worth of man, and the truth that he can best show his devotion to god by trust and faith in his fellow man and by the spirit of Christian brotherhood. Unbound by formal creeds, it seeks improved human relations as the most realistic approach to the Kingdom of God on earth.