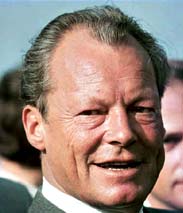 Willy Brandt was born in Lübeck, Germany, in December 1913. He was educated in Lübeck and Oslo after escaping Nazi persecution in Germany. After leaving Germany, he continued his work against Nazism through international cooperation and frequent visits to various European countries. He had close links with German anti-Nazi forces and for some time also lived in the Berlin underground.

In 1937 Brandt worked in Spain as a political observer and representative of humanitarian relief organizations. In 1938 he was expatriated by Hitler’s government. In 1940, after the German occupation of Norway, he was captured, but not identified. Released as a Norwegian, Brandt fled to Sweden. Until 1945 he lived in Stockholm.

In 1945/6 Brandt worked as a correspondent in Germany for Scandinavian newspapers. In 1947 he became press officer at the Norwegian Mission in Berlin. In 1948 he started his political career, holding various offices with the Social Democratic party in the Berlin House of Representatives. He was also a member of the German Bundestag. From 1957 to 1966 Brandt was Mayor of Berlin. Later he was Chairman of the Social Democratic Party of Germany. He won the Nobel Peace Prize in 1971. In 1992, Brandt died of cancer in Unkel near Bonn.

My Life in Politics

by Barbara Marshall. Makers of the Twentieth Century Series (1990).