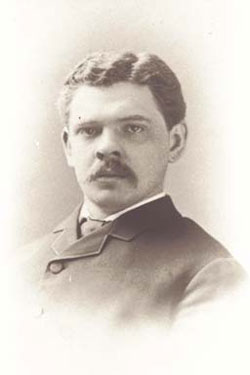 William Wallace Fenn was born in Boston on February 12, 1862. He was the only child of William Wallace and Hannah (Osgood) Fenn, who had but recently married and moved to Boston to make a hazard of new fortunes. The father had secured a position as clerk in the store of Cobb, Bates & Yerxa, but died seven weeks after the birth of his son. The mother might have found a home for herself and her child with her people in New Hampshire, and was urged to do so, but she harbored certain ambitions for her little son, and decided to stay in Boston and give the boy the advantage of its schools and colleges. She opened a boarding house on Shawmut Avenue, and by dint of hard work, planning and pinching, managed to support herself and her boy until he was able to assume the duties of the breadwinner. The experience threw mother and son very closely together. Friends were scarce, but were little missed. Each had the other, and that was enough. All the mother’s hope and pride were centered on her son; all the son’s dependence and gratitude were concentrated on his brave mother. Her task was to make the living; his task was to apply himself to his books. Neither failed the other. He stood at the head of every class he entered, with the exception of the Harvard class, and he was second in that.

Fenn prepared for college in the Boston Latin School, and entered Harvard with the class of ‘84. He majored in Greek and Latin and gave himself an excellent knowledge of Hebrew. At graduation he was the class orator. The higher criticism of the Bible had a powerful fascination for him. He entered the Harvard Divinity School, and found his chief interest in New Testament exegesis. One of his most rewarding activities in the Divinity School was helping Professor Thayer in the preparation of the “Greek New Testament Lexicon,” a task for which he was well-fitted by his skill in the classics. It was during the years in the Divinity School that he made the change in his denominational preference which brought him to the Unitarian Fellowship. His mother’s people were Seventh-Day Baptists; his father’s were Trinitarian Congregationalists. His interest in the higher criticism of the Bible, coupled with his proficiency in the original languages, enabled him to make his own discoveries and draw his own conclusions. The Old Testament became for him a thoroughly human and an exceedingly vivacious book, full of fleeting shades of meaning, covert allusions, plays upon words, whimsies, humor, pathos and sarcasm. All this is lost to most of us in the English translation, but it waits to reward the enlightened reader with surprise and delight. Reading the Synoptic Gospels with the same skill and open-mindedness, he made the same discovery. The figure of Jesus of Nazareth emerged from the page, a rich, forceful, lovable personality, with a vivid God-consciousness, a passion of human sympathy, a boundless generosity, a rare depth and clarity of thought, a concept of God as a God of Purpose and of man as God’s son and fellow-laborer, a conviction that love is the law of life and the condition of survival. Here was a gloriously real figure, a man with a message for his times and all times. That message became in the young student’s eyes the authentic Christian religion; and the Unitarians with their avowal that “practical religion, as summed up in the words of Jesus, consists in love to God and love to man,” were the only fellowship with which he could affiliate himself without prejudice to his intellectual integrity.

Far from regretting his orthodox upbringing, he was grateful for it to the very end. He felt that it had nurtured in him a spiritual hunger and a moral passion which the less emotional Unitarian frame of mind might never have taught him. In many ways it was an ideal equipment for a parish minister and preacher. His mind was perfectly free to observe, cogitate, and judge, without prejudice or restraint. At the same time, he never lost that habit which many orthodox cults engender of dramatizing his religious convictions into a vivid urgent personal faith, a warm personal relationship to God, a bond of personal intimacy and understanding with Jesus, an earnestness in prayer, an active conscience, and a peremptory sense of moral values. Almost at once he revealed himself a preacher of exceptional power. For all pulpit arts and graces he had nothing but contempt. His sermons were always a thought in motion, each step clearly defined, and the conclusion forcibly driven home. He preached not the comforts but the duties of religion. He was exacting both with himself and his listeners. A certain robustness of mind and temperament was essential for anyone who proposed to hear him, for there was nothing soothing or relaxing in the atmosphere when he was in the pulpit. He was a deep, hard, honest, fearless thinker, a singularly strong personality; and very much in earnest. One would never think of him as a “beautiful” preacher; but he was always forceful, often uncomfortable, sometimes magnificent. He had a way of saying unforgettable things, and making lasting impressions.

He graduated from the Harvard Divinity School in 1887, and was promptly ordained and installed as minister of Unity Church, Pittsfield, Massachusetts. Three years was as long as he was permitted to stay in this first parish. In 1890 he was called to the First Unitarian Society of Chicago. Here he served eleven years, and in 1901 was invited to become the Bussey Professor of Theology in the Harvard Divinity School. This position he held for the remainder of his life. For seventeen years he was Dean of the School, following Rev. Francis G. Peabody in that office. He was far too conscientious a man to assume new burdens easily, and each of these changes meant for him a busy period of preparation and readjustment. His appointment to the Bussey Professorship obliged him to turn his attention from New Testament exegesis to the philosophers and theologians. These subjects he handled in no slavish fashion but always as a critic, and in a way to arouse an attitude of personal appraisal and judgment in his students. He found a great fascination in the dialectics of Edwards and Hopkins, and offered a profitable course in the New England Theology. Towards the end of his life his hobby was reading all the literature of Puritanism he could lay hands on.

His chief contribution to the religious thinking of his times was his idea of Jesus of Nazareth. He presented Jesus as a completely human figure, a sample of humanity at its best, whose every power, quality and spiritual achievement was within the category of things human and hence just as possible for other human creatures as for Jesus. To him, Jesus was not only the Revealer of God to Man, but the Revealer of Man to himself. To look upon Jesus as a glorified scapegoat who bears the burden of man’s sins and atones, by his innocent death, for man’s guilt, was for Fenn not only utterly false but also utterly craven. Jesus was not a convenient means of escape from the Divine retribution, but an inconvenient standard of manhood and character for each man to accept and follow as best he could. In Jesus man can discover his own potentials. From Jesus man can learn to think of God as infinitely understanding, forgiving, patient, and loving. Most of all, from Jesus man can learn to see life as a unity of purpose; that God has a design for this world—there is an objective, life has a meaning, there is a Kingdom of Heaven to build on earth, and God is waiting for man to reach spiritual maturity and recognize himself as a son of the Most High and enter that bond of loving and eager cooperation with God which was all-compelling in the case of Jesus himself.

Dean Fenn was at his best as a friend and counselor of young men. He could teach them certain valuable qualities: religious faith, true devoutness, intellectual honesty, an objective in life. They learned from him that no man can worship God with a lie on his lips; that not all men can do great things, but that there is greatness in little things faithfully done. He did not turn them all into scholars, but he gave them an idea of what scholarship is. He never talked about money or fame, but he taught them to cultivate character, self-respect, the satisfactions of a conscience at peace with itself, and that a man’s greatest effectiveness lies not in what he says or does, but in what he is. Hundreds of grateful young men will carry to their graves the influence of his personality.

In 1890 he married Faith Huntington Fisher. There were five children, one of whom, Dan Huntington Fenn, became a Unitarian minister. His family life was exceedingly happy. He died March 6, 1932, and his body lies buried among his kinsmen in the little graveyard in Weston, Vermont.