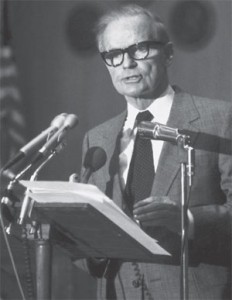 William Proxmire was a Senator from Wisconsin from 1957 to 1989. Born in Lake Forest, Illinois, on November 11, 1915, he attended the public schools of Lake Forest and the Hill School, in Pottstown, Pennsylvania. He graduated from Yale University in 1938, from the Harvard Business School in 1940, and from the Harvard Graduate School of Arts and Sciences in 1948.

During the Second World War, Proxmire served in the Military Intelligence Service. He was a member of the Wisconsin State assembly from 1951 to 1952 and an unsuccessful Democratic candidate for Governor of Wisconsin in 1952, 1954, and 1956. He was elected in a special election on August 28, 1957 as a Democrat to the United States Senate to fill the vacancy caused by the death of Joseph R. McCarthy and served from 1957 to 1959. He was reelected in 1958, 1964, 1970, 1976, and 1982 for the term ending in 1989. He was chairman of the Committee on Banking, Housing, and Urban Affairs (Ninety-fourth, Ninety-fifth, Ninety-sixth, and One Hundredth Congresses). He was a resident of Washington, D.C., until his death in 2005.

—From the Biographical Dictionary of the United States Congress