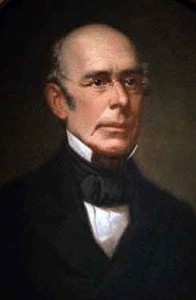 In the very first issue of his anti-slavery newspaper, the Liberator, William Lloyd Garrison stated, “I do not wish to think, or speak, or write, with moderation. . . . I am in earnest — I will not equivocate — I will not excuse — I will not retreat a single inch — AND I WILL BE HEARD.” And Garrison was heard. For more than three decades, from the first issue of his weekly paper in 1831, until after the end of the Civil War in 1865 when the last issue was published, Garrison spoke out eloquently and passionately against slavery and for the rights of America’s black inhabitants.

The son of a merchant sailing master, William Lloyd Garrison was born in Newburyport, Massachusetts, in 1805. Due in large measure to the Embargo Act, which Congress had passed in 1807, the Garrison family fell on hard times while William was still young. In 1808 William’s father deserted the family, forcing them to scrounge for food from more prosperous families and forcing William to work, selling homemade molasses candy and delivering wood.

In 1818, after suffering through various apprenticeships, Garrison began work for the Newburyport Herald as a writer and editor. This job and subsequent newspaper jobs would give the young Garrison the skills he would utilize so expertly when he later published his own paper.

When he was 25, Garrison joined the Abolition movement. He became associated with the American Colonization Society, an organization that believed free blacks should emigrate to a territory on the west coast of Africa. At first glance the society seemed to promote the freedom and happiness of blacks. There certainly were members who encouraged the manumission (granting of freedom) to slaves. However, it turned out that the number of members advocating manumission constituted a minority. Most members had no wish to free slaves; their goal was only to reduce the numbers of free blacks in the country and thus help preserve the institution of slavery.

By 1830 Garrison had rejected the programs of the American Colonization Society. By this time he had worked as co-editor of an antislavery paper started by Benjamin Lundy in Maryland, The Genius of Universal Emancipation. And on January 1, 1831, he published the first issue of his own anti-slavery newspaper, the Liberator.

In speaking engagements and through the Liberator and other publications, Garrison advocated the immediate emancipation of all slaves. This was an unpopular view during the 1830s, even with northerners who were against slavery. What would become of all the freed slaves? Certainly they could not assimilate into American society, they thought. Garrison believed that they could assimilate. He believed that, in time, all blacks would be equal in every way to the country’s white citizens. They, too, were Americans and entitled to “life, liberty, and the pursuit of happiness.”

Though circulation of the Liberator was relatively limited — there were less than 400 subscriptions during the paper’s second year — Garrison soon gained a reputation for being the most radical of abolitionists. Still, his approach to emancipation stressed nonviolence and passive restistance, and he did attract a following. In 1832 he helped organize the New England Anti-Slavery Society, and, the following year, the American Anti-Slavery Society. These were the first organizations dedicated to promoting immediate emancipation.

Garrison was unyeilding and steadfast in his beliefs. He believed that the the Anti-Slavery Society should not align itself with any political party. He believed that women should be allowed to participate in the Anti-Slavery Society. He believed that the U.S. Constitution was a pro-slavery document. Many within the Society differed with these positions, however, and in 1840 there was a major rift in the Society which resulted in the founding of two additional organizations: the Liberty Party, a political organization, and the American and Foreign Anti-Slavery Society, which did not admit women. Later, in 1851, the once devoted and admiring Frederick Douglass stated his belief that the Constitution could be used as a weapon against slavery. Garrison, feeling betrayed, attacked Douglass through his paper. Douglass responded, and the attacks intensified. Garrison and Douglass would never reconcile their differences.

Although Lincoln’s Emancipation Proclamation was a government decree, Garrison supported it wholeheartedly. After the end of the Civil War in 1865, Garrison published his last issue of the Liberator. After thirty five years and 1,820 issues, Garrison did not fail to publish a single issue.

— From PBS’s Africans in America, “People and Events”