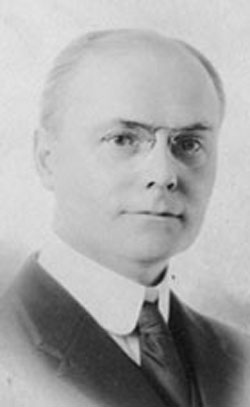 William Sullivan was born on November 15, 1872, at East Braintree, Massachusetts, far from the lovely Irish town of Bandon from which Patrick and Joanna Sullivan had come to America only the year before. Neither he nor she dreamed that they were welcoming a son whose gifts of mind and heart were to win for him a place among the intellectual and spiritual leaders of his time.

The boy showed early a love for books, and at the age of five read the “Lives of the Saints” and was so filled with fervor that he then chose the name of the martyr Laurence as the name that should become his at confirmation. His father was a man full of impetuous enthusiasms, but he died when the boy was only fourteen and the lad grew into manhood under the guidance of his gentle mother.

The family had moved to Quincy in William’s infancy, and it was in the public schools there that he began his student life. He made rapid progress in his studies and excelled in athletics, especially baseball. From the Quincy High School he went to Boston College and thence to St. John’s Seminary in Brighton. He was distinguished in English studies and the classics, and in his second year at the Seminary won the coveted Fulton medal for excellence in public debate. Two years later, in 1896, he received the degree of Ph.B. and in 1899 and 1900 the degrees of S.T.B. and S.T.L. from the Catholic University of America. To these, Meadville Theological School added a D.D. in 1917, and Temple University of Philadelphia an LL.D. in 1934.

Following his decision made in boyhood, he was ordained to the Catholic priesthood in 1899 and became a member of the Paulist community. For several years he was Professor of Sacred Scripture and Theology at St. Thomas’s College. While teaching there he became interested in the Modernist movement then gathering strength among the Catholic clergy of both Europe and America. Despite valiant efforts to retain his belief in the dogmas of his inherited faith, he was constrained by the strength of his convictions to withdraw from the Catholic Church two years before Pope Pius X issued the encyclical against Modernism. At the time of his retirement he was the priest of a Paulist church near the University of Texas in Austin.

His mother, whom he deeply loved, had died just before his ordination, and he had no strong family ties. For two years he lived in Kansas City, Missouri, in great loneliness and considerable privation. In the autumn of 1910 he moved to Cleveland, Ohio, where he engaged in tutoring for several months, and while there found his way to the Unitarian Church, then under the ministry of Minot Simons. His stay in Cleveland was brief, however, as he accepted an invitation to teach English and history in the Ethical Culture School of New York City. But as his whole soul was centered in religious matters he could not long remain satisfied in other work. Accordingly, in October, 1912, he entered the Unitarian ministry, and was installed as minister of the newly organized Church of All Souls in Schenectady, New York.

It was not long before his brilliant preaching and consecrated personality attracted wide attention. As a result he was called to the associate pastorate of the Church of All Souls, New York City. He accepted the call on the condition that he might carry on for at least a year the work in Schenectady. During this double ministry he gave many lectures and addresses, so many indeed that his health, never robust, necessitated a leave of absence for several months in 1915. But the next year saw him on a mission for the American Unitarian Association to the Pacific Coast, where in the month of September he preached more than forty sermons. In 1917 he was the Dudleian lecturer at Harvard.

By 1922 the Church of All Souls, of which Dr. Sullivan had become minister upon the death of Dr. Slicer in 1916, celebrated the hundredth anniversary of its founding, and he felt free to accept the urgent invitation of the Unitarian Laymen’s League to become its Mission preacher. The two years spent in this work were exhausting but fruitful.

The Church of the Messiah, St. Louis, Missouri, was in need of a pastor and Dr. Sullivan took charge there in 1925, expecting to remain for three months. He stayed, however, for three years. During the summer of his first year in St. Louis he taught in the Meadville Theological School and, during his entire stay in the West, he gave an incredible number of lectures and addresses. Had he been obliged to write his addresses he could not have made half of them, but from a well-stored mind he drew a wealth of wisdom and he spoke extemporaneously with an English diction not often equaled.

In 1928 he withdrew to Mt. Gretna, Pennsylvania, hoping to devote himself to writing, but after a year and a half he accepted the unanimous call of the Unitarian Society of Germantown, Pennsylvania. In December 1929 he took up his ministry there, and remained in the happiest association with that congregation until his death, October 6, 1935.

Dr. Sullivan had a creative mind of a high order. His sermons belonged to the “literature of power”; a rhythmic style of utterance was natural to him. Some of his paragraphs read like chants. The sermons were majestic in diction, commanding in moral imperatives, profound in spiritual insight. They combined the reasonable, the dutiful and the devout.

It is not surprising that in a life so filled with speaking and traveling Dr. Sullivan should have had little time for writing. But he did publish Letters to His Holiness, Pius X (1910); The Priest (1912); From the Gospels to the Creeds (1919); Readings for Meditation: First Series, (1922), Second Series, (1935). Two articles of his in the Atlantic Monthly: “Our Spiritual Destitution,” March 1929, and “The Anti-Religious Front,” January 1930, were widely read and quoted. For six years he reviewed books for the New York Herald Tribune. In addition to his published work he left an autobiography, published later under the title Under Orders, and a collection of Epigrams and Criticisms in Miniature.

One of the extraordinary features of Dr. Sullivan’s relation with other denominations than the Unitarian may be mentioned—they called on him to speak, to preach, to conduct retreats for their ministers, even for their theological students, as if he belonged to all of them. In fact, the last service he rendered outside his own church was giving a retreat for Congregational ministers in September 1935.

His brilliant mind, his devout spiritual nature, his keen sense of humor, his fervent eloquence, his charity toward all in thought and deed, and his modest opinion of his own attainments endeared him to all with whom he came in contact. The old found him tender and full of courtesy, the young were sure of his understanding sympathy and yielded him a pure devotion.