Mr. Chaffin’s life was at once rich and uneventful. Its influence was pervasive and cumulative through fifty-five years in one community. The power of the man was not in what he said or did, but in what he was. It was the man behind the sermon or the pastoral call that gave both their peculiar value. He was not only the minister of his church but for a long period of years minister-at-large for the whole countryside. The fact that he was as much respected and loved by Catholics as by Protestants, by foreign-born as by American-born, testifies to his quality. Here again, however, many of his most revealing acts and words were of so intimate and personal a nature that they cannot be recorded here. Gentle as he was, he was at the same time upright and downright. When asked on behalf of a committee to send an unpleasant notification to a neighbor, he refused to do it by mail, but went in person. He hated meanness and cruelty, and here his indignation was quickly kindled. It is significant that while children loved him and high-minded men and women honored him, the selfish and egotistical avoided him.

This record of his life will fail if it does not disclose as well how many-sided was his nature. No one could tell a story better than he, especially when it was at his own expense. He had a keen sense of humor. When he fell into the town reservoir in the month of February and was pulled out by an attendant, he said, “Hold on, while I go back and get my hat.” An Irish friend, hearing of the mishap, said, “We won’t have to send to the Pope of Rome any more for holy water, for now we have it on tap.” As a youth he excelled in outdoor sports and in later years he was an expert chess player, and only one billiard player in town could cope with him. It was characteristic of the man that whatever he attempted, he did thoroughly and well. He was always trying to improve a sermon up to the moment of its delivery. His other literary work, his History of Easton and his genealogies, disclose the same painstaking habit.

Chaffin was born on August 16, 1837, in Oxford, Maine. He was named William after his father, but his middle name, Ladd, came to him in this fashion. William Ladd, “the Apostle of Peace,” had lectured in Oxford the evening before the baby was born. The baby’s aunt, Phebe Shattuck, suggested that he be named after this man, and so it was. William’s father died when the boy was eight months old. His mother was a helpless invalid, and he was cared for at Oxford by his aunt Phebe until he was two years old, when he was taken to Concord, New Hampshire, to the home of Mrs. Nancy Fessenden, his father’s sister, who adopted the boy and brought him up with her own son of about the same age. He graduated from the high school at sixteen, and was intending to enter Dartmouth College. This, however, became impossible when the Fessenden home and shop were destroyed by fire. Instead he went to work in his father Fessenden’s trunk and harness shop, which had been set up in another place.

When William was nearly nineteen, he became a clerk in the office of The Northern Railroad. Later he was promoted to be an assistant paymaster. In the meantime he was a regular attendant at the Unitarian Church. He was fascinated by the eloquent preaching of Rev. Augustus Woodbury and never missed a sermon of his. Thus were his thoughts turned toward the ministry, and in 1857 at the age of twenty he made his decision. However, he had no money. Seven men in the Concord Church promised to contribute each fifty-five dollars a year for three years to enable young Chaffin to go to Meadville. He secured passes by rail most of the way, and one day arrived in Meadville and was directed to what the lady he enquired of described as “Huidekoper’s Mill.” Young Chaffin was soon singing bass in the choir of the Meadville Church where Miss Rebecca H. Bagley, who later became Mrs. Chaffin, was organist. He was also made sexton of the church and superintendent of the Sunday School. He graduated in June, 1861.

After graduating, Chaffin preached for a month at Detroit and once in Chicago, where he stayed with Robert Collyer. In the autumn he returned to New England “by way of Meadville, of course, to see Rebecca.” After preaching in several places, he was engaged to supply the church in Manchester, New Hampshire, during the absence of its minister who was a chaplain in the army. After several months, Chaffin accepted a call to the Spring Garden Society in Philadelphia and there he was ordained on October 17, 1862. In the meantime, on August 12, he had married Rebecca Bagley at Meadville, thus acquiring a mate who was to be his strength and stay through sixty years.

The work in Philadelphia was attended with many difficulties. The Civil War absorbed the thoughts and energies of everyone. An effort to raise money to build a church proved unsuccessful. Twice Mr. Chaffin recommended that the enterprise be abandoned, and finally in October 1865 the Society acquiesced in his recommendation and disbanded. Chaffin returned to New England and was soon called to the Unitarian Church in Fitchburg, his engagement to begin on January 1, 1866. He rented a house and had his books and furniture sent on from Philadelphia. He began his ministry in the Fitchburg Church on January 7, 1866, preaching at two services, but was almost immediately prostrated by a serious illness which frustrated all his plans. The Fitchburg Church waited for six months and then at last accepted his withdrawal. The Chaffins spent a year at his old home in Concord, New Hampshire, and then—but let him tell it in his own words:

I was one day in the A. U. A. rooms, when Rev. Rush R. Shippen, then the Secretary of the Association, said to me, “Do you not feel sufficiently recovered to settle over a small church in the country where you would have but one service a Sunday and not many people to visit?” I answered that I would like to try it, but said, “Where is there such a church?” He replied, “North Easton.” I went down a Sunday in October and preached in the little church, so small that a classmate in describing it afterwards said the minister in the pulpit could shake hands with the chorister at the other end of the church.

After preaching several Sundays, he accepted a call to settle as minister at a salary at $1,200 with house rent. So on January 1, 1868, began a ministry which was destined to last until his death on January 7, 1923.

The story of these fifty-five years reveals the cumulative value of unselfish service in a small community through a long period of years. First of all, he gathered the people of the village about him in the work and worship of the little church. In 1874, Oliver Ames, the second of that name, began the erection of a beautiful stone church, and it is no exaggeration to speak of it as a memorial to Mr. Chaffin inasmuch as it was his successful ministry that made a larger church necessary, and the confidence and affection he inspired that prompted the generosity of Mr. Ames. This church was dedicated on August 26, 1875, Rev. Rush R. Shippen preaching the sermon. Every sitting in the church was immediately taken. Mr. Chaffin during his long ministry saw many memorials placed in this building, including two La Farge windows. Later Mr. Ames bequeathed money for the erection of a parsonage which was completed in 1878 and stands beside the church.

In 1869 Mr. Chaffin was chosen a member of the Easton School Committee and served continuously thereafter for twenty-eight years. For most of this time he was secretary of the Committee and wrote the annual reports. As the other members were generally businessmen, most of the work fell on him, and he was really superintendent of schools until 1885, when that office was created and filled for the first time. A recent superintendent of schools has summarized Mr. Chaffin’s accomplishments for the public schools as follows:

Easton can thank him for his pioneer work in building up a high school, enriching its course of study, employing trained teachers in the grades, visiting the schools regularly and procuring the first superintendent of schools—truly an admirable record in the interest of education.

Another service Mr. Chaflin rendered his town was the writing of a History of Easton. He spent altogether between five and six years in gathering material and writing the book, which was published in 1886. Rev. James De Normandie said, “You have written the best town history that has appeared in this country.” 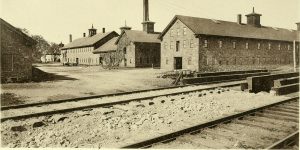 A photo from Chaffin’s book, History of the Town of Easton.

While working on the History of Easton, he became interested in genealogy, and having gathered much material he wrote the Biographical History of Robert Randall and his Descendants, of which there were many in Easton. Still later he wrote The Chaffins in America.

Active as he was in his church and in town affairs, Mr. Chaffin still found time for wider interests. In 1881 he was elected a trustee of the Meadville Theological School and served in this capacity until 1908. During this time he visited Meadville every year. He also served as secretary of the committee that raised $50,000 to establish the James Freeman Clarke Professorship. In 1892 the Meadville Alumni Association was formed and Mr. Chaffin was chosen as its first secretary and treasurer. He at once began to gather information about the alumni of the School, and thus laid the foundation for the first general catalogue, which was published in 1910.

Mr. Chaffin always labored under the physical handicap of an unsound heart. Several times he was obliged to go away for complete rest. At last in 1905, he felt that he “must be relieved of the strain of work and responsibility of the active ministry” and he presented his resignation. The church voted unanimously “that the resignation be not accepted, that Mr. Chaffin be retained as Senior Minister of the Society and retain and occupy the parsonage during his senior pastorate.” His salary was continued as before and an Associate Minister chosen to carry the burden of the church work.

In May, 1915, Meadville Theological School conferred upon Mr. Chaffin the degree of Doctor of Divinity. This he at first declined on the ground that he had rendered no service adequate to such an honor. However, the Meadville alumni were unanimous and insistent that he should accept. One said this was the first thing Mr. Chaffin had done in fifty years of which he disapproved. Thus persuaded, he went to Meadville and received the degree, which was conferred in the following words:

William Ladd Chaflin: alumnus of the School of fifty-four years’ standing; accurate and painstaking historian; devoted to the interests of the School as student, secretary of the Alumni Association, lecturer, and trustee; surpassing all your contemporaries in length of continuous active service to a single parish; loved as few men have been loved by your fellow ministers and the people of your church.