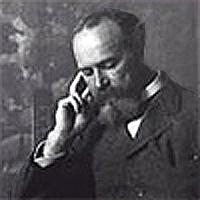 Charles Peirce’s best friend, William James, was named for William James of Albany, who emigrated from Ireland about 1789, participated in the opening of the Erie Canal, and accumulated some three million dollars—one of the great fortunes of the time. William James’s father, the older Henry James, attended Princeton Theological Seminary, but soon abandoned it and his family’s Calvinistic faith. In 1886, the elder Henry James moved from New York City to Cambridge, Massachusetts. He had acquaintance with Emerson beginning about the time of the birth of William James in 1842. Indeed, Emerson proposed the elder Henry James as a charter member of the Saturday Club, which began in 1855-56 at Parker’s Hotel in Boston. The original members included Louis Agassiz, Richard Dana, James Russell Lowell, and Benjamin Peirce. After attending the Lawrence Scientific School, where his teacher was Charles W. Eliot, William James attended Harvard Medical School. Soon depression struck, disabling him for almost five years. His friendship with Oliver Wendell Holmes, Jr. was especially important to him at this time. In 1876 his career was secure as a Harvard professor. For more than a decade, he worked on The Principles of Psychology, published in 1890. Some of us may remember encountering the striking chapter of that book entitled “Habit.” James also published various essays entitled The Will To Believe.

His Gifford Lectures delivered in 1900, are a fascinating description of The Varieties of Religious Experience. Three years before, he had remarked, “Religion is the great interest of my life.” In these lectures, he communicates with boldly intense colors the contrast between the religion of the healthy-minded and the religion of the twiceborn sick soul.

Among his essays, we find one on the question “What Makes a Life Significant?” He answers: struggle, risk, courage—heroism makes life significant. To those who knew him, James himself was truly a hero of the mind. He even dared to affirm that God is finite, struggling, helping others, as well as needing help in the struggle against evil. The Hibbert Lectures by James at Manchester College, Oxford University in 1908, were on A Pluralistic Universe. There we find these words expressing this philosopher’s vision of God:

God himself may draw vital strength and increase of very being from our fidelity. I do not know what the sweat and blood and tragedy of this life may mean, if they mean anything short of this. If this life be not a real fight, in which something is eternally gained for the universe by success, it is no better than a game of private theatricals. . . . But it feels like a real fight—as if there was something really wild in the universe which we are needed to redeem; and first of all to redeem our own hearts from atheisms and fears. For such a half-wild, half-saved universe our nature is adapted.

My thesis is this: Anything short of God is not rational, anything more than God is not possible.

Theism is and will be the centre of gravity for all attempts to solve the riddle of life. And theism must mean the faith of that person who believes that God be conceived as the deepest power in the universe, a power not ourselves which not only makes for righteousness, but means it, and which recognizes us. At a single stroke, theism changes the dead blank it of the world into a living thou, with whom the whole person may have dealing. We are indeed internal parts of God.