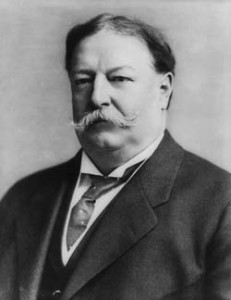 The 27th president of the United States, and the 10th chief justice of the Supreme Court, was also an active Unitarian lay person. Taft was born on September 15, 1857 in Cincinnati, Ohio. His family was affiliated with the First Unitarian Church in Cincinnati, founded in 1830, where there is a memorial to Taft. Taft’s father Alphonso had rejected his Baptist faith to become Unitarian, and young Will attended Sunday School there. He was educated at Yale University (1878), and then returned home for the Cincinnati Law School. He also married a hometown girl in 1886, Helen W. Herron. After a brief legal career, he was appointed to the Ohio Superior Court in 1887. From 1892 to 1900 he served as a circuit judge of the Sixth Federal Circuit Court. In 1899 when it was thought he might be offered the position of president of Yale, Taft said that religion was one of the things which stood in his way. In a letter to his brother Henry he stated that he was a Unitarian, and although he believed in God, he did not believe in the divinity of Christ. He said that he thought religion had had an “elevating influence” in history. In 1900 President William McKinley appointed Taft to head up a commission to end military rule in the Philippines. Soon thereafter he became governor general of the Philippines, and proved an able administrator. During this time he was named honorary president of the Independent Church of the Philippines, which was formed from disaffected Catholics. His fine work in the Philippines brought him to the attention of President Theodore Roosevelt, who made him secretary of war in 1904. They became close friends, and by 1906 he was Roosevelt’s hand-picked successor. Although he was reluctant Taft became the candidate and defeated William Jennings Bryan in 1908 saying he would continue all of Roosevelt’s policies. During this campaign on the Republican ticket, his liberal faith surfaced after he received countless letters saying that a Unitarian atheist should not be allowed to occupy the White House. One paper accused him of looking upon the Savior as a “common bastard and low, cunning impostor.”

Taft had a difficult term as president because he could not fulfill Roosevelt’s dream of progressive reform. Some have said that Taft was ill-suited for the hard work of the presidency. As a boy he had loved dancing, and this affable man was more inclined toward a life of fun and ease rather than intense labor and conflict. He loved to play golf, and was most famous of all, for his large size. Although many antitrust cases were settled during his Presidency, and the income tax was established, Taft ran into conflict over several issues. Conservation issues became especially heated after Taft fired Gifford Pinchot, the symbol of Roosevelt’s conservation policies. Taft was conservative by nature, and ended up supporting capital over labor time and again, and feared the progressives wanted to overturn the social order. Eventually Roosevelt challenged Taft for the nomination of the Republican Party, and ended up creating the Bull Moose Party. In the 1912 election Taft finished third. When he was president he appointed Unitarian president Samuel Atkins Eliot to the U.S. Board of Indian Commissioners.

After his term as U. S. president, Taft became president of the General Conference of Unitarian and other Christian Churches from 1915-1925, at which time the General Conference was absorbed by the American Unitarian Association (AUA). In 1917 he was drawn into controversy over World War I. In his capacity as moderator of the proceedings, Taft gave an opening address. He called upon the Conference to affirm President Woodrow Wilson’s conduct of the war, only to be followed by John Haynes Holmes’ speech criticizing the war effort. In the fiery debate that followed, Taft called for and received a positive vote on a resolution to continue the campaigns and win the war. There was concern that some ministers were creating discord in their parishes, and Taft affirmed this with his own role at his home church in helping to oust the pacifist minister. Taft was appointed chief justice in 1921 by President Warren G. Harding. When he became ill in 1930 he had to resign, and then died on March 8, 1930.