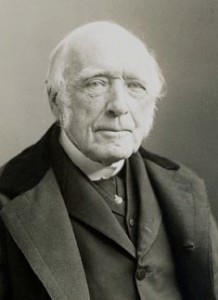 William Henry Furness was a minister who had a long and significant pastorate in Philadelphia, and was also an important biblical critic. Furness was born in Boston on April 20, 1802. He attended Boston Latin School where he developed a lifelong friendship with Ralph Waldo Emerson. After that he attended Harvard College, and then entered the Harvard Divinity School in 1820. He finished in 1823, preached his first sermon in Watertown, Massachusetts, and candidated at a number of places, but did not secure a position. The following May he went to Baltimore to serve in an assistant capacity for three months. While he was there he received an invitation to preach in Philadelphia one Sunday. The church there, which had been founded by Joseph Priestley, had been without a minister for 29 years, but was still operating. They invited Furness to stay and be their permanent minister. He accepted and was installed on January 12, 1825 with his classmate Ezra Stiles Gannett participating in the service. This relationship with the Philadelphia congregation continued for 71 years, 50 as pastor, and the remaining time before his death as minister emeritus. In 1825 he married Annis P. Jenks, and they had four children, including the architect, Frank Furness.

In the sermon preached on the fiftieth anniversary of his ordination, he wrote:

I preached my first sermon in the fall of 1823 in Watertown, Massachusetts; and then for a few months I preached as a candidate for settlement in churches in Boston and its vicinity needing pastors. Kind and flattering things were said to me; but I put little faith in them, as they came from many relatives and friends that I and mine had in that quarter, and their judgment was biassed by personal affection. I was strengthened in my distrust when friends, fellow-students, and fellow-candidates were preferred before me. I never envied them their success… In May, 1824, I gladly availed myself of the opportunity that was offered me of spending three months in Baltimore as assistant to Mr. Greenwood.

…I was surprised and gratified when, upon the eve of my departure, I was waited upon by a committee of four or five. I have had a suspicion since—so few were the members of the church then—that this committee comprised nearly the whole church meeting from which they came; and they cordially invited me to return and become their pastor. As I had come a perfect stranger, and there were no prepossessions in my favor, I could not but have at the very first a gratifying confidence in this invitation… My ordination was delayed some months by the difficulty of obtaining ministers to come and take part in it. It was a journey then. But it is pleasant now to remember that with the two Wares, Henry and William, and Dr. Gannett, came one of the fathers, far advanced in years, the venerable Dr. Bancroft, of Worcester, to partake in the exercises of the occasion.

The tiny remnant of a congregation in Philadelphia grew rapidly and a new church was built within three years at the corner of Tenth and Locust, designed by William Strickland. Furness held some controversial opinions, but his accommodating manner kept him out of the limelight in the Miracles Controversy. He sent a copy of his Remarks on the Four Gospels to Andrews Norton, his old teacher. Although Norton disagreed with the ideas, the willingness to seek his opinion, pacified much of the antagonism that was vented on others who held Transcendentalist views. Furness accepted that the miracles actually happened, but he interpreted them as purely natural events, and said that faith did not require confirmation by the supernatural. Furness was especially interested in the historical Jesus. Remarks (1836) was followed by several other books, including Jesus and His Biographers (1838) and A History of Jesus (1850). Furness said that the divine truth in Jesus’ life was expressed in nature. Let it be that he taught nothing more than the religion of Nature, still by concentrating all its force and loveliness in his individual being, by incorporating it with his life, and so teaching it as it had never been taught by any other, he made natural religion, his religion, his truth. (Furness, Remarks in Miller, ed. Transcendentalists, p. 125-126)

Furness was an active abolitionist, who turned the cellar of his home into a station on the Underground Railroad, and he entertained William Lloyd Garrison and others. He wrote a number of hymn texts. Frederic Henry Hedge worked with Furness translating works from the German. Furness took an active interest in his son’s architectural profession. When the father gave the closing address to the fourth annual convention of the American Institute of Architects in 1870, he urged the organization to break out of established molds. He said they should create “new orders of architecture.”

He had some skill as a draftsman, and may have influenced his youngest son in this way. Furness wrote to friend Emerson in 1852 that “one has great satisfaction in living in one’s children.” After Furness’ active ministry ended, his son Frank designed a new church building for The First Unitarian Church. Located at the corner of Chesnut and Van Pelt Streets, it was dedicated in 1886. William died on January 30, 1896 in Philadelphia. He was an important liberal presence outside of New England at a time when Unitarian churches were scattered and isolated.