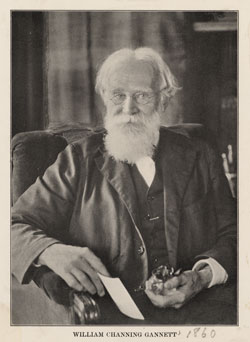 William Channing Gannett, born in Boston on March 13, 1840, was named after, and christened by, William Ellery Channing, the “founder of American Unitarianism.” His father, Ezra Stiles Gannett, had gone from the Harvard Divinity School to be Dr. Channing’s associate, and in 1842 became his successor at the old Federal Street Church (now the Arlington Street Church) in Boston. Ezra Stiles Gannett was one of the founders of the American Unitarian Association, its first secretary, and later its president. Thus William Channing Gannett grew up in the temple of Boston Unitarianism. His grandfather Caleb had also been a New England minister, and through Caleb’s wife the clerical heritage went back three more generations. Boston was also the home of William Channing Gannett’s mother, Anna Linzee Tilden, who died in 1846, too soon to influence her son’s life, except that he must have owed to her his strains of poetry and humor.

After graduation from Harvard College in 1860, he taught school for a year in Newport, Rhode Island. His letters of the period betray both his indecision and the New England conscience which beset him all his life. He thought he was a poor teacher and unfit for either business or the law. He doubted his worthiness for the ministry. Nevertheless he entered the Harvard Divinity School in the following year—then left it in mid-term to join the first party sent by the New England Freedmen’s Society to the sea islands of South Carolina. There several thousand freed slaves were half-starving; it was the New Englanders’ task to feed and clothe them, get them to work, market their product, open schools—to demonstrate that illiterate black freedmen would work without the incentive of the lash. It was a tough pioneer job; many left it after a few months. Young Gannett managed several plantations and organized a school. Despite bouts of malaria he made good, and stayed four years. It was the richest experience of his life, he felt, and he planned to devote his life to the freedmen. But his father’s ill health brought him back to Boston.

He accompanied his father to Europe in 1865, remaining for a year of study. Slowly he made up his mind for the ministry. Graduating from the Divinity School in 1868, he at once faced West. His first parish was at Milwaukee, then a Western town of muddy streets and wooden sidewalks where a minister rode horseback to make his parish calls. In 1871 he returned East to be near his father (who died that year), taking a parish in East Lexington, and he subsequently devoted several years to writing Ezra Stiles Gannett, a biography which includes chapters that are still a classic history of the evolution of American Unitarianism. That filial task completed, Gannett again turned to the West. He was minister of Unity Church in St. Paul from 1877 to 1883, then for four years served as a sort of minister-at-large for the Western Unitarian Conference, beside writing Sunday-school lessons and study outlines. Upon his marriage in 1887 (to Mary Thorn Lewis, a birthright Quaker from Philadelphia, who became a kind of associate pastor with him), he settled in the Hinsdale, Illinois, parish. In 1889 he moved to Rochester, New York, and lived there, as pastor until 1908, and as pastor emeritus until his death in December, 1923.

William Channing Gannett could not, of course, remember his godfather, Dr. Channing, who had died when he was two years old, but he had grown up in Channing’s living memory. Emerson he met face to face, and in college days he often walked in to Boston to hear Theodore Parker preach. These three were his major prophets all his life, topics for his sermons and study classes, inspiration of his thought. Like Channing, he was all his life a rationalist-mystic. He early accepted Emerson’s transcendentalist doctrine of the immanence of God in the blowing clover and in the soul of every man. To him, as to Emerson, Jesus was “one man true to what is in you and me.” He had, with Theodore Parker, an historical awareness that the heresies of one age become the orthodoxies of the next, and at moments he was, like Parker, a passionate reformer.

His father had not been an abolitionist; he was. All his life any challenge to the Negro’s dignity as a human being aroused him. Even in his Milwaukee days he was a strong woman suffragist. In Rochester Susan B. Anthony was a member of his congregation and an intimate friend. With her he worked for years to have women admitted to the then exclusively male University of Rochester; she pledged her life insurance, he and his wife their house, to complete the necessary fund.

But he was pimarily a parish minister. He was never a dramatic preacher, though some of his thoughtful sermons were reprinted, in America and abroad, in English and in German, in many tens of thousands. He was a born teacher, with a rare capacity to draw his listeners into personal expression. The ever-inquiring clarity of his own mind and the shining integrity of his character left a profound impression on all his parishioners. 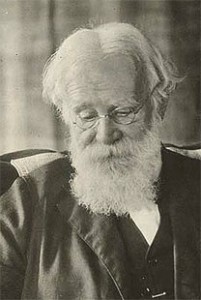 Three Unitarian ministers were his lifelong friends and coworkers. To John White Chadwick of Brooklyn many of his poems were dedicated. With Jenkin Lloyd Jones of Chicago he published in 1877 a collection of sermons, The Faith That Makes Faithful, and, with Jones in 1882, he founded Unity as an organ of Western religious “radicalism.” With Frederick Lucian Hosmer he published three series of poems—The Thought of God—the first series in 1885, a second in 1894 and a third in 1918. With Hosmer also he edited Unity Hymns and Chorals (1880; revised edition, 1911; James Vila Blake was a coeditor of the first edition), in which, after the manner of Samuel Longfellow, they adapted and rewrote orthodox hymns and lay poems for the liberal churches, thereby offending some who believed in sticking to the original texts.

Jenkin Lloyd Jones was also his ally in the “Western Issue” which once caused some commotion among American Unitarians. At the Cincinnati meeting of the Western Unitarian Conference in 1886, Mr. Gannett proposed the resolution that “the Conference conditions its fellowship on no dogmatic tests, but welcomes all who wish to join it to help establish truth and righteousness and love in the world.” The fact that no mention was made of the Christian heritage or allegiance annoyed some conservative Unitarians. But with passing years such things are forgotten and the summary of “Things commonly believed among us,” which, when Mr. Gannett proposed it at Cincinnati had seemed dangerously radical, was later circulated with approval by the Unitarian Association. The words are still familiar:

This was the free goal of his Channing-Emerson-Parker background.

It was characteristic of Mr. Gannett that when the Ministerial Alliance in Rochester, after considerable debate, voted to admit the Universalist and Unitarian ministers to its ranks, he could not feel free to do so unless the Alliance would also welcome Rabbi Max Landsberg of the Temple Berith Kodesh. (The Temple and the Unitarian Church had shared joint Thanksgiving services even before Mr. Gannett went to Rochester. In his days their members organized together the Boys’ Evening Home, a newsboys’ settlement in the building since enlarged and christened Gannett House). To Mr. Gannett the “fundamental” in the Unitarian tradition in which he lived was always its constantly expanding horizon.

His hymns long ago crossed denominational lines in the hymn-books. “Bring o morn thy music,” modern words to replace the evangelical text set to “Nicaea,” is probably the most widely sung today; “The Stream of Faith,” beginning, “From heart to heart, from creed to creed, The hidden river runs,” may be most characteristic. Of his sermons, “Blessed Be Drudgery” (a product of his first year in the pulpit) was most widely reprinted; “The House Beautiful” (whose inspiration is still recognized by the popular magazine which uses its title) perhaps has most contemporary life. His Sunday-school lessons, analyzing the evolution of religion and of Bible literature, were widely used, and so were his outlines for study classes in Emerson, Browning, Dante, Wordsworth, and the elder New England poets. His scholarly studies of Unitarianism, beginning in the biography of his father and culminating in his book on Francis David: Founder and Martyr of Unitarianism in Hungary (1914) still have value.

He was a rarely modest man, friendly if somewhat shy (possibly his lifelong deafness contributed to that), with, especially in his later years, when his full beard was snowy white and his old-fashioned ear trumpet was ever in hand, an impressive, radiant personality. Dr. Crothers, who succeeded him in St. Paul, called him a “poet-preacher,” and remarked that a quarter century after Gannett had given up his six years’ charge, the St. Paul parish was still known as “Mr. Gannett’s church.” His Rochester colleague, Rabbi Landsberg, called him the greatest teacher of practical religion he had ever met, adding “Dr. Gannett could teach by his very presence. He was a man of power who spoke with authority.” Harvard gave him the honorary degree of S.T.D. in 1908, in the last group of honorary degrees conferred by President Eliot.

The Biography of Ezra Stiles Gannett

The Biography of William Ellery Channing