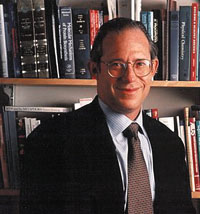 Dr. Haseltine, Chairman of the Board of Directors and Chief Executive Officer of Human Genome Sciences, also has more than 20 years of active business focus. He founded seven biotechnology companies, including Dendreon, Diversa, and Human Genome Sciences. Additionally, Dr. Haseltine was an advisor to Venture Capital Fund Healthcare Ventures, when he participated in the creation of more than 20 other biotech firms, including Medimmune. Dr. Haseltine received his doctorate from Harvard University in biophysics and was a professor at Harvard Medical School and Harvard School of Public Health from 1976 to 1993. He has a distinctive record of academic achievement in both cancer and AIDS research, for which he has received numerous awards and honors. Dr. Haseltine has also published more than 250 scientific papers and authored several books. He founded the Journal of Aids Research and Retrovirology, and The Journal of Regenerative Medicine.

Click here for supplemental reading about William A. Haseltine on Amazon.