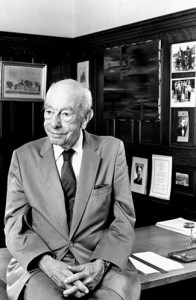 Willard Van Orman Quine, one of the most important philosophers of the 20 th century, died on Christmas Day at the age of 92. In more than 20 books that have been translated into some 50 languages, Quine has addressed topics both weighty and whimsical. Noted for his wit, compendious scholarship, and generosity, he is best known for his contributions to the theory of knowledge and logic. He has guest-lectured on five continents.

Reviewing Quine’s “Quiddities: An Intermittently Philosophical Dictionary” (1987), a collection of sometimes whimsical short essays, Hilary Putnam, the Cogan University Research Professor, praised Quine as “not only a great philosopher, but also a master of the English language and a genuine polymath.”

Putnam wrote that, “Anyone who wants to encounter a great philosophical mind in a less technical mood, and to get some feeling for Quine as a peerless companion, raconteur, and amused commentator on the passing show … cannot do better than to read this book.”

Quine lectured in six languages. Ihor Sevcenko, the Dumbarton Oaks Professor of Byzantine History and Literature, Emeritus, at Harvard, who met Quine in 1974, said: “He spoke about the great philosophers as his equals whose views he neither accepted or not. He was very fond of Hume, not so fond of Plato.” According to Sevcenko, “he was the epitome of greatness and the absolute opposite of pomposity.”

Born in Akron, Ohio, Quine earned his A.B. at Oberlin (1930) and his Ph.D. under Alfred North Whitehead at Harvard (1932). Quine’s many books include his autobiography, The Time of My Life. He was a senior fellow of the Harvard Society of Fellows, a member of the National Academy of Sciences, the American Academy of Arts and Sciences, and has served as president of the eastern division of the American Philosophical Association.

The Time of My Life: An Autobiography by Willard Van Orman Quine