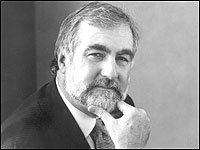 “William Schulz, the director of Amnesty International USA, has done more than anyone in the American human rights movement to make human rights issues known in the United States.” —The New York Review of Books, June 2002.

Dr. Schulz acted in India in consultation with the Holdeen India Fund, a fund dedicated to ending communal violence and the political and economic empowerment of women, bonded laborers and others. He led fact-finding missions to the Middle East and Northern Ireland and was instrumental in his denomination’s opposition to U.S. military aid to El Salvador.

Dr. Schulz participated in an Amnesty mission to Darfur, Sudan, to help redress the humanitarian crisis in that region. He led an Amnesty mission to Liberia to investigate atrocities committed during the civil war there and in 1999 returned to Northern Ireland with Amnesty to insist that human rights protections be incorporated into the peace process. During his years with Amnesty he has traveled extensively, both in the US and abroad, including a 2004 trip to Cuba under the sponsorship of the Unitarian Universalist Service Committee.

From 1985-93 he served on the Council of International Association for Religious Freedom, the oldest international interfaith organization in the world. Throughout his career he has been outspoken in his opposition to the death penalty and his support for women’s rights, gay and lesbian rights, and racial justice, having organized and participated in demonstrations and written extensively on behalf of all four causes.

Dr. Schulz has served on the boards of People for the American Way, Planned Parenthood Federation of America, the Communitarian Network and Americans United for the Separation of Church and State. He is currently a member of the board of the Unitarian Universalist Service Committee.

He has appeared frequently on radio and television and is quoted widely in newspapers and magazines, including the New York Times, the Washington Post, and the Christian Science Monitor.